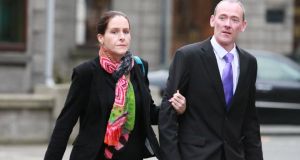 A teenage girl who is severely brain damaged, cannot walk or talk, is almost blind and has to be fed through a tube, has secured €5.2 million under a settlement of her action over injuries allegedly suffered at her birth at Cavan General Hospital. The settlement was made without admission of liability.

It was alleged the injuries suffered by Sarah Reilly (13) were a result of the alleged wrongful administration to her mother Marie of the drug Syntomentrine before she underwent a Caesarean section. It was claimed Syntometrine should never be given to women who are pregnant or in labour and it is normally administered after delivery.

The claims were denied and it was also pleaded Syntomentrine could not have been administered prior to delivery.

Mr Justice Michael Moriarty said that of all the medical negligence cases with which he had dealt, this was “the most catastrophic”.

He described the efforts of Sarah’s parents, Paul and Marie Reilly, to enhance the quality of life of their daughter as “nothing less than heroic”.

Sarah Reilly, Lisdrumskeagh, Shercock, Co Cavan, through her mother Marie, had sued the HSE over alleged negligence at the time of her birth, by elective Caesarean section, on July 31st, 2001, at Cavan General Hospital.

In the proceedings, it was claimed Marie Reilly was admitted to the hospital for a Caesarean section on July 31st. It was alleged the baby was exposed to a risk of damage or injury by the alleged administration, before the Caesarean section, of Syntometrine.

It was alleged there was failure to recognise Syntometrine should never be administered to a woman who is pregnant or in labour. Its sole use in obstetric practice, it was alleged, is to ensure contraction of the uterus once the baby has been delivered.

As a result of the alleged wrongful administration of the drug, it was claimed the baby was exposed to severe trauma.

Outlining the claim, Denis McCullough said their case was that nothing else but the administration of Syntometrine explained what happened and why a delivery which should have been so simple was so difficult.

This was “a brutal and excessively traumatic delivery”, said counsel.

Both sides agreed it was a difficult delivery, said counsel. The baby was born in very poor condition, was badly bruised all over her body and there was severe trauma to the head during delivery.

At one stage, a consultant took over from a junior doctor in an effort to take out the baby, he said.

Outside court, Mrs Reilly said her daughter is “one in a million” and the family’s “little angel”.

“No amount of money will make up for what was done to us. Hopefully we will now be able to get everything she deserves, everything she needs. An apology would have been nice.”

Paul Reilly said it was a relief the court battle was over and it was unfortunate no apology had been provided.