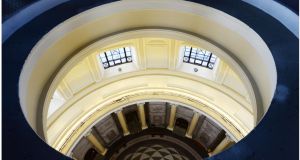 The High Court has ruled Bank of Scotland is entitled to a judgment of €18.5 million against the trustees of a non-denominational church- the Victory Christian Fellowship-arising from loans advanced for the construction of a new church. Photograph: Bryan O’Brien/The Irish Times.

The High Court has ruled Bank of Scotland is entitled to a judgment of €18.5 million against the trustees of a non-denominational church- the Victory Christian Fellowship - arising from loans advanced for the construction of a new church.

The judge also ruled the bank, and joint receivers it appointed over three of the Fellowship’s Dublin premises, are entitled to permanent injunctions restraining the trustees and others from obstructing or interfering with the receivers taking possession of properties.

The three properties are located at Kilmacud House, Kilmacud Road, Upper Stillorgan; Westland Row; and Firhouse Road, Tallaght. They were put up as security for monies advanced by Bank of Scotland in 2007.

The loans were advanced so the Fellowship could move from its base at Westland Row to a bigger premises at Firhouse, where a new church- the Victory Centre- was constructed. The property at Kilmacud is used as a direct provision centre for asylum seekers in Ireland.

In its action, Bank of Scotland, represented by Rossa Fanning Bl. said it was entitled to judgment, and the bank had valid security over the properties. It was fully entitled to appoint receivers, chartered accountants Paul McCann and Patrick Dillon over the three properties last May.

The bank rejected the trustees claims it had breached an agreement in regards to a strategy to deal with the Fellowship’s debt to the bank. There was no reasonable possibility of the trustees obtaining alternative finance within any reasonable period of time, which was a required element of any agreement between the parties, the bank said.

In defence and counterclaim, the trustees, who accepted the monies are due. claimed they had agreed in late 2012 with Bank of Scotland to resolve the dispute over the unpaid loans. However, they claimed the agreement was breached by the premature appointment of receivers.

They argued that last April, prior to a decision being taken to appoint the receivers, the bank was given information, from the Fellowship’s financial advisor, which advisor was not sanctioned to give.

The information was disclosed to Bank of Scotland before the parties had resolved or concluded their differences and was a decisive reason for the appointment of receivers.

This information included that Revenue had removed the Fellowship’s charitable status and that allegedly fraudulent invoices were generated in relation to the construction of the Victory Centre by a party connected to the trustees.

The Fellowship represented by Patrick O Reilly SC argued this confidential information was wrongly disclosed to the bank, and that it amounted to a breach of confidence by the financial advisor.

The trustees had denied the claims in respect of the invoices, and argued the removal of the charitable status by revenue was under appeal.

In his ruling, Mr Justice Paul Gilligan said the central issue in the case was the dispute over the banks decision to appoint a receiver.

The bank, he said, was increasingly frustrated by the existence of mounting arrears on the debt owed by the defendants. There was no realistic prospect of alternative financing being obtained.

He said the bank would have had to be informed about the removal of the Fellowship’s charitable status. The Judge said even if the alleged fraud was taken into account by the bank “it could have been only of minor importance.”

The judge also noted evidence from Mr Hade that no actual agreement had been reached concerning the debt between Bank of Scotland and the trustees.

The court was unable to conclude if there had been a breach of confidence by the Fellowships financial advisor, who the judge said was not a party or a witness at the proceedings. It was not possible to find the advisors behaviour by disclosing certain material to the Bank was unconscionable and in breach of duty.

The judge also made permanent injunction preventing the trustees from interfering with the receivership or trespassing at the three properties,

Last May receivers obtained injunctions against the trustees over what they said was an organised campaign to prevent gaining access and taking possession of the premises. The receivers claimed those orders were ignored and the trustees and unnamed others prevented them gaining possession.

Arising out of the trustee’s alleged failure to comply or to appear at court to deal with the allegations the High Court made orders directing that the three be brought before the court over alleged contempt. However, the three later purged their contempt and gave undertaking to abide by the terms of the injunctions.