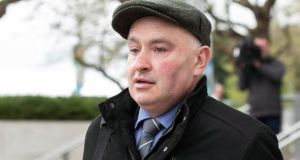 Patrick Quirke’s appeal of his conviction for the murder of Bobby Ryan is due to begin on October 13th. File photograph: Collins Courts. r

An appeal by Co Tipperary farmer Patrick Quirke against his conviction for the murder of Bobby Ryan will be conducted remotely next month and could be completed in less than four days, the Court of Appeal has heard.

Lawyers for the State told the three-judge court on Monday that legal submissions from the prosecution and defence “run to over 100 pages” each and there would be a lot of paperwork in the upcoming hearing.

Quirke’s full appeal hearing is due to begin on October 13th and was previously expected to last four days.

However, Court of Appeal president Mr Justice George Birmingham last week expressed hope that the parties might be able to conduct the appeal in a shorter time frame. The judge had adjourned the matter to allow both sides to consider legal submissions.

Quirke (50) of Breanshamore, Co Tipperary, had denied murdering Bobby Ryan (52), a part-time DJ who went by the name ‘Mr Moonlight’. Mr Ryan went missing on June 3rd, 2011 after leaving his girlfriend Mary Lowry’s house at about 6.30am.

His body was found 22 months later in April 2013 in an underground run-off tank on the farm owned by Ms Lowry and leased by Quirke at Fawnagown.

It was the prosecution’s case that Quirke murdered Mr Ryan so he could rekindle a love affair with Ms Lowry and that he subsequently “staged” the discovery of the DJ’s body after Ms Lowry tried to terminate his lease at Fawnagowan.

Quirke’s lawyers contended that the prosecution had failed to prove their case beyond mere suspicion. They pointed to “inconsistencies” in Ms Lowry’s evidence, and claimed she was “not a reliable witness”.

A jury at the Central Criminal al Court found Quirke guilty of Mr Ryan’s murder by a 10-2 majority verdict after deliberating for almost 21 hours following a trial that lasted 13 weeks. The farmer was given a mandatory life sentence by Ms Justice Eileen Creedon.

Edward Doocey BL, for Quirke, informed Mr Justice Birmingham on Monday that the appeal could be conducted remotely. The judge said he would discuss with his colleagues as to what the feasibility of that would be and noted that another mention date could be convened if there were any issues.

“For the moment we will operate that the case will proceed on that date,” he said.

Mr Justice Birmingham pointed out that the case had been called on for four days and asked Mr Doocey if it could be done in less time than this.

“It is certainly hoped it will be,” replied Mr Doocey.

David Humphries BL, for the Director of Public Prosecutions (DPP), pointed out that the State was in agreement that the matter could be dealt with remotely and did not think it would take four days.

In summary, Mr Justice Birmingham said it was “all systems go” for the defendant’s appeal hearing to begin on October 13th.