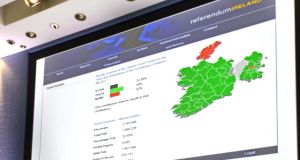 A screen shows the result of the Children’s Referendum on the main stage at the count centre in Dublin Castle after the results were announced last November. Photograph: Alan Betson/The Irish Times

The Government's information campaign in the Children’s Referendum involved "blatant psychological manipulation" aimed at securing a Yes vote amounting to "a grievous interference" with the sovereignty of the people, the High Court was told today.

The Government knew well that legal principles in existence for some 17 years prevented public monies being spent on advocating a particular outcome in a referendum but its campaign - "carefully packaged as information" - was designed to tilt the field in favour of a Yes vote, Paul Sreenan SC argued.

The Supreme Court had found the Government campaign involved wrongful conduct in that it was neither neutral, fair or balanced. However, that decision came just two days before the November 2012 poll and the court's full reasons for its decision were only delivered after the referendum, he said.

The Government could and should have brought in emergency legislation to defer the referendum in those circumstances, but it failed to do so, he added.

Mr Sreenan was opening the challenge by Dublin homemaker Joanna Jordan, of St Kevin's Villas, Glenageary, Dun Laoghaire, aimed at overturning the referendum result, whch approved the amendment proposed by the Government by 58 to 41 per cent based on a 33.49 per cent turnout.

Ms Jordan is seeking leave to bring a petition seeking to overturn the result. If her application is refused on grounds she has failed to show the Government campaign materially affected the result, as required in the Referendum Act 1994, she has also asked the court to find the "material effect" standard is unconstitiutional.

She is relying on the Supreme Court's judgment in the challenge by Dubliner Mark McCrystal to the Government's spend of €1.1m public monies on its information campaign. The Supreme Court found that spend was in clear disregard of the limits imposed by the Constitution on what the State can do in a referendum.

Today, Mr Sreenan argued the Government information campaign, via its booklet, website and advertising, was very likely to have been seen by many potential voters. It was designed to influence a Yes vote and one must conclude it was to some extent effective in achieving its desired objective.

While it was "probably impossible" in any scientific way to calculate what effect the campaign had, it must be considered to have had an effect, he said.

If it was impossible to say exactly what effect, but the law imposed such an impossible burden, that law was unconstituitional as it did not allow for a vindication of rights.

He submitted the onus should be on the State, not Ms Jordan as petitioner, to demonstrate that the wrongful conduct found against the Government did not have a material effect on the outcome. The courts draw inference every day and the court will hear evidence as to the effect, he said.