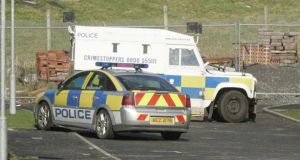 A motorist allegedly punched his mother repeatedly and tried to push her out of a moving car, the High Court in Belfast has heard.

Michael Yeo also threatened to kill her during a drink-fuelled road trip during which he crashed into another vehicle, prosecutors claimed.

Mr Yeo, of Fitzroy Street in Portadown, Co Armagh, is further accused of driving with excess alcohol, failing to report, stop or remain at the scene of an accident, dangerous driving and other motoring offences.

Police were first alerted on April 11th to a woman with blood on her face attempting to get out of a car at Flush Place in Lurgan. It was claimed the driver had been seen dragging her back into the car.

Conor Maguire, prosecuting, said the vehicle then reversed into a parked car at Greenhill Park before returning to the original location.

“The driver was observed by police striking the female front-seat passenger repeatedly,” he told the court.

On being removed from the car and arrested Mr Yeo was said to have replied: “Is she all right?”

The alleged victim, his mother, sustained facial and leg injuries. She required four stitches for a laceration to her left eye which may have a lasting impact from scarring, according to the prosecution.

The court heard both Mr Yeo and his mother were drunk at the time.

“She made a verbal complaint at the scene and claimed her son, during a car journey between Lisburn and Lurgan, struck her around the face numerous times and at one point attempted to push her out of the vehicle as it was moving,” Mr Maguire said . “She also claimed he threatened to kill her.”

Mr Yeo denied carrying out any attack or false imprisonment of his mother. He told police his mother sustained her injuries when she fell out of the car when it stopped, the court heard.

Opposing his application for bail, Mr Maguire contended that a proposal for him to live with his brother in Belfast was unsuitable. With the judge backing his assessment, defence counsel Joel Lindsay did not advance the case any further.

Agreeing to a request to withdraw the application, Mr Justice Treacy stressed information from a medical professional should be supplied in any future bid. “There needs to be something before the court to reassure (it) that if he was released on bail he’s not going to attack his mother.”