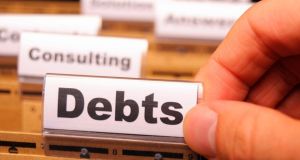 The country’s first proposed debt settlement arrangement has been accepted by creditors at a meeting in Dublin today.

Creditors voted by a majority of more than the required 65 per cent to accept the settlement for a Donegal civil servant in his 40s with unsecured debts of over €100,000. His debts were the result of a business failure caused by a family member being diagnosed with cancer.

In October, the court had granted a protection certificate to the man for 70 days to allow him to come to the arrangement.

The case is the first to be agreed between a debtor and his creditors in Ireland and will be referred to the Insolvency Service of Ireland before going back to Monaghan Circuit Court for final approval. It involved three major banks and three other creditors.

A debt settlement arrangement is one of the three new debt resolution mechanisms introduced under the Personal Insolvency Act 2012. It is designed for individuals who have no prospect of paying off their unsecured debts in the next five years.

Speaking today, the man’s personal insolvency practitioner Ronan Duffy, of McCambridge Duffy, said during the course of the process, the creditors challenged the debtor’s expenditure and the fees being charged to operate the arrangement.

The debtor’s expenditure was “outside the guidelines in one or two areas”, he said, but once the reasons behind that were explained, the creditors accepted that.

Expenditure guidelines were never meant to be a “beans on toast diet” and neither were they meant to provide “a life of luxury”, Mr Duffy said.

He said he believed the banks had “embraced” the personal insolvency process.

“They recognise that if they say no, the person can go bankrupt.”

Mr Duffy said the debtor had made a full and frank disclosure to address his financial problems under the new system, and his creditors recognised that and voluntarily agreed a large write-off of the outstanding debt.

“The write-off is substantial but it should be noted that the debtor is paying back what he can afford and this will vary from case to case depending on income and any assets.”

He said he expected to be back in court in about 10 days time to get final approval for the arrangement.

The debtor’s name will then be placed on a register held by the Insolvency Service of Ireland. His debts will be settled over a five year term and, if his circumstances improve, he may be required to pay more than currently agreed.

His creditors also have 14 days to challenge the arrangement.

Mr Duffy, who has overseen 5,000 insolvency arrangements in the UK, said the process took 12 weeks compared to four weeks in the UK.

“In the time this has taken, I’ve had 138 arrangements approved in the UK,” he said.

He expects the process will become faster and more streamlined once trust is established with lenders.

New Beginning, a campaigning and debtor advocacy group, said this first settlement would pave the way for many more write-downs in the coming months. Co-founder Ross Maguire said “after more than five years of stagnation, we finally have a process that’s potentially fast-moving”.

“The insolvency regime only came into operation in September, and already we have reached agreement on the first case. We anticipate that this milestone first settlement will give hope to other debtors.”

Co-founder Vincent P. Martin called the insolvency regime “a fair system” and said: “Debtors are obliged to repay as much as is feasible - but it contains inbuilt recognition that saddling people with debts they can never realistically repay is not in anyone’s best interests.

“These agreements are an important step in returning individuals to solvency, and will allow Ireland’s economic recovery to get under way fully.”