Coronavirus: Gardaí have made 76 arrests for breaches of lockdown regulations 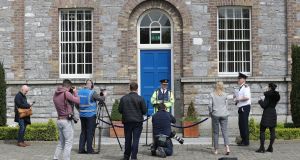 Gardaí have arrested 76 people for failing to adhere to Covid-19 lockdown regulations and new “spit hoods” have been used on suspects 15 times during the same 2½ week period.

The spit hoods can be applied to suspects, to cover their head and face, to prevent them spitting at members of the Garda as they are being arrested or while in custody.

There have been 31 incidents of spitting or coughing at gardaí during Covid-19 policing, all of which could be dealt with as assaults on Garda members when they reach the courts.

Details of the enforcement activities were released on Tuesday and cover the period from April 8th, when new powers specific to Covid-19 were conferred on An Garda Síochána, to last Saturday, April 25th.

The Garda had previously said that from April 8th to April 18th some 34 arrests were made for breaches of the regulations. A further 42 arrests have now been added to the total, making for 76 arrests in total.

Garda Commissioner Drew Harris said the Attorney General had confirmed the Garda’s legal interpretation of rule stipulating people can only exercise within 2km of home.

Garda members have been told they should not arrest anyone from the North for breaching this rule because they do not have a home in the Republic to be more than 2km from.

However, speaking in Dublin yesterday, Mr Harris downplayed the significance of that by saying most people, from both sides of the Border, were showing overwhelming compliance with the regulations.

In only two cases, from hundreds of thousands of interactions with members of the public, did gardaí want to arrest people from the North but found themselves unable to do so.

Mr Harris said that in both of those cases the people who evaded arrest have travelled into the Republic and driven very long distances without what would be deemed as an adequate reason for their trips.

He added that, like the Republic, there were travel restrictions on people in the North, where only essential journeys were permitted. The PSNI, he said, was enforcing that measure north of the Border in conjunction with the Garda activities in the Republic.

He confirmed the 2km rule could applied to any person from outside the Republic staying overnight in any form of accommodation, as that was legally a “place of residence”.

Mr Harris added anyone from the North was subject to all of the other Covid-19 regulations, including not being permitted to gather in groups. He said they were also covered by all of the other legislation gardaí had at their disposal including road traffic, public order and drug laws.

He noted while there had been 76 arrests under the Covid-19 powers since April 8th, gardaí had detected 760 other breaches of law at checkpoints during that period.

When asked whether his members were frustrated they could not enforce the 2km rule against people from the North, Mr Harris suggested people who were not complying with the 2km rule were also making other “poor choices” and this had resulted in the 760 breaches of the law being detected.

Asked if compliance with the Covid-19 restrictions was beginning to wane, Mr Harris said he did not believe that was the case.

While there was more traffic on the road, many sectors of the economy and the public service were still operating, necessitating and allowing those workers to move around.

He added when drivers were stopped at Garda checkpoints in the overwhelming number of cases they were found to have a legitimate reason for making their journey.

Gardaí had conducted more than 10,000 checkpoints last week under Operation Fanacht to ensure people were complying with the Covid19 restrictions. A “big push” in that operation had already begun and would continue through the upcoming May Bank Holiday Weekend.

While the cost of the operation was considerable, many events the Garda had planned policing operations for, including the Euro 2020 soccer fixtures in Dublin and others, had been cancelled, he noted.

However, as “the weeks go on” the cost of new protective equipment and new vehicles would become clearer and would be reported to Government. What gardaí perhaps envisaged would be “an operational sprint has now seemed to become more of a marathon” meaning resources and personnel could “not be exhausted”.

Asked if many of his members had become infected with Covid-19, he stopped short of giving exact figures but said the number was lower than one might expect for an organisation as large as the Garda.

Protective equipment was being issued to all Garda divisions every week and the organisation was “in a good place”, he said.