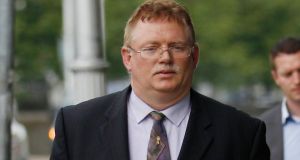 Gerry Walshe, Lisdeen, Co Clare: latest action is understood to relate to the decision by the State to issue and sign the final referendum certificate in August although Mr Walsh’s legal action, which was ultimately dismissed by the Supreme Court, was still in being. Photograph: Collins/Courts

A fresh legal challenge is to be brought against the result of the same-sex marriage referendum. The latest challenge has been brought by Gerry Walshe, an electrician from Lisdeen, Co Clare.

The Supreme Court last week refused to permit separate legal actions brought by both Walshe and Maurice Lyons, from Callan, Co Kilkenny, to bring further appeals against the rejection of their challenges to the Yes result of the referendum. The court said: “It would not be necessary in the interests of justice that there be an appeal to the Supreme Court.”

However in a new application, to be made before the duty judge on Tuesday’s vacation sitting, Mr Walshe will ask the High Court for permission to bring proceedings against the State by way of judicial review.

The latest action is understood to relate to the decision by the State to issue and sign the final referendum certificate in August although a challenge, namely Mr Walsh’s legal action, which was ultimately dismissed by the Supreme Court, against the result, was still in being. The Bill formally allowing same-sex couples to marry is due to pass through the Dáil and Seanad in the coming weeks.

In its decision last week, the Supreme Court ruled neither Mr Walshe nor Mr Lyons had met the requirements for a Supreme Court appeal as neither had raised the necessary legal point of general public importance, had raised no points “of substance” and the interests of justice did not require they be given permission to appeal.

It also noted that because no stay had been placed on the certificate of the referendum result after a Court of Appeal decision, “very serious constitutional consequences” might have occurred had it decided to grant leave to appeal. It said both men had sought in separate actions initiated on June 2nd to challenge a provisional referendum certificate.