Case against Leo Sherlock struck out after damages paid 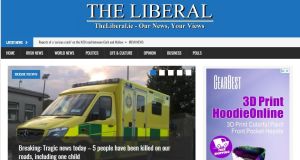 Owner of The Liberal.ie Leo Sherlock agreed not to repeat the copyright breaches. Image: Screengrab from TheLiberal.ie

A case against Leo Sherlock of TheLiberal.ie website for breaches of copyright has been struck out with no order as to costs after he paid damages and agreed not to repeat the breaches.

Mr Sherlock agreed in July to publish apologies to Independent Newspapers (Ireland) Ltd and court reporting agency CCC Nuacht Teoranta over the use of their material on the website in 2014, 2015 and 2016.

Mr Sherlock (35), of Glenvar, Ardee Road, Collon, Co Louth, had also agreed to pay substantial but undisclosed damages to both parties as well as costs, and to retract the published material which infringed copyright. He also acknowledged the “important work” that court reporters do in informing the public.

When the case by CCC Nuacht Teoranta came before Ardee District Court on Monday, solicitor Rossa McMahon of PG McMahon Solicitors said the matter could be struck out with no order.

CCC Nuacht, which produces news reports of criminal court proceedings and supplies them to national and regional publishers, had contacted Mr Sherlock on a number of occasions requesting that he cease and desist from using its court reports on his website, but it received no response.

It claimed multiple breaches of copyright, including the use of a story published on June 29th, 2015, about a convicted paedophile who was jailed for sexually assaulting a baby.

Mr Sherlock’s site also used a CCC Nuacht story on November 13th, 2016, about a former Church of Ireland worker who was jailed for the rape and molestation of 14 boys over a 40-year period.

While the case taken by Independent Newspapers was not listed on Monday, it is understood that Mr Sherlock has complied in full with the settlement terms in that case. He is understood to have paid agreed undisclosed damages and costs. He has acknowledged the breaches of copyright and undertaken not to repeat them.

Independent Newspapers had alleged multiple copyright breaches on the part of Mr Sherlock, his servants or agents, by wrongfully reproducing photographs from the Independent’s website on TheLiberal.ie without licence, authority or consent.

The breaches included the wrongful alteration and reproduction on September 1st, 2016, of a photograph of a crash in an article entitled ‘Absolutely tragic: Gardaí appeal for witnesses after 11-year-old boy is killed in collision as he cycled to school this morning’.

Another copyright breach was committed on August 29th, 2016, when Mr Sherlock wrongfully reproduced a photograph of a man in an article entitled ‘One of the country’s most dangerous predators expected to leave Ireland after he was set upon by a number of men in a vigilante attack’.

In July, Mr Sherlock agreed to publish apologies on his website for the copyright breaches, but they were published in an almost illegible form in a light pink typeface on a white background.