Callinan: ‘I cannot be usurped by subordinates using PAC as platform’

Responding to news that the PAC intended to hear evidence from two garda whistleblowers next week, Mr Callinan said the investigation was “grossly unfair” to him as the officer responsible for discipline and control in the force. 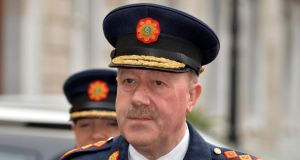 Garda Commissioner Martin Callinan has told the Public Accounts Committee he would be seeking legal advice and reserved the right to take action after learning the committee would hear evidence from a “so-called” Garda whistleblower.

The serving garda has over a two-year period made serious allegations of Garda corruption relating to the termination of motorists penalty points.

“I cannot be usurped by subordinates coming in to use this committee as a platform.”

He had just been informed in public session by PAC chairman John McGuinness that the one of two Garda whistleblowers had made further serious allegations in correspondence in the past week and would appear before the committee to give evidence next Thursday.

Commissioner Callinan had said earlier in this morning’s hearing that he was against the garda appearing before the committee to give evidence.

He said the man, one of two “so-called whistleblowers”, was a serving garda.

It would be a “rocky road” if serving members were permitted to come before the committee and make criminal allegations about their colleagues.

He added the two men, one now retired from the Garda, who had provided information to members of the Oireachtas on alleged corruption in the cancelling of penalty points may be in breach of data protection legislation.

They had shared large volumes of material on a regular basis and he reserved the right to take disciplinary action against any Garda member who engaged in “bandying around information”.

He believed they should use the confidential reporting system established within the Garda to facilitate whistle blowing. Or they should go to an assistant commissioner examining the allegations around the workings of the penalty points system.

“It’s important to me as commissioner that I have control and authority over the force,” he said of the possibility that disciplinary action may be taken if he felt it was warranted in the future.

He would be undermining the Garda’s role in policing and security if he did not reserve the right to maintain control when he believed police work was being undermined without due control by Garda members seeking to raise their concerns.

Public Accounts Committee chairman John McGuinness (FF) told Commissioner Callinan a box of documents that had been given to the committee by one of the two Garda whistleblowers had now been examined by the committee.

Its members had decided the information it contained was relevant to the committee’s investigations.

Personal information on motorists had been redacted and the documents had been distributed to the committee members during a private session yesterday.

He said Commissioner Callinan could be provided with the redacted versions of the documents.

The Garda could also review the original box of documents, but would not be permitted to take that box away for review.

Mr McGuinness said the whistleblowers had made very serious allegations to the committee in recent days and he felt he was obliged to inform Commissioner Callinan of that.

It was at that point, some two hours into this morning’s hearing, that he informed him of the committee’s decision to hear evidence from one of the whistleblowers next Thursday.

Commissioner Callinan had earlier accepted there were issues with the penalty points system that needed to be addressed.

But in an apparent reference to the Garda whistle blower who is still serving, he insisted Garda members could not simply begin investigations against each other when they felt the urge. And they could not share large quantities of confidential information whenever they pleased.

Commissioner Callinan cautioned people against making assumption of corruption or poor practices on the basis of information that had entered the public domain relating to some cases where drivers had penalty points cancelled.

He accepted there were weakness in the fixed charge notice system but insisted that on the whole it was working well, with problems indentified in only 4.55 per cent of cases.

“I’m putting my hands up to a number of fault lines in the system,” he told the PAC this morning.

New guidelines for the operation of the system had been compiled to address those shortcomings. They were currently being reviewed by the DPP and on approval from that office would be rolled out across the force.

However people making allegations of corruption around the cancellation of penalty points across the Garda force had done so without the full facts.

He added information had been presented on some penalty points terminations by people who had only partial access to the Garda’s computerised PULSE system, where details of the fixed charge notices and penalty points are recorded.

In many cases where the reasons for terminations had been left blank by the gardai involved, an additional layer on the PULSE system that could not be accessed by all Garda members often contained documentation from motorists.

In many cases these letters from the motorists to the gardai contained very legitimate exceptional circumstances under which individual members of the force should terminate points.

He had seen some reports in the media that outlined one case where the garda who terminated the points entered the reason of “bees worrying livestock” to explain the termination.

While people might be amused by this, when the full facts were examined the cancellation of the points was legitimate.

He said the motorist in question did “significant voluntary work in his community” and he was also a bee keeper. On one occasion when engaged in his community work, his wife had called him to say his bees were “out of control” in an area where they were a danger to livestock and local people.

He was urged to return home to resolve the matter and as he did, he was detected driving at nine kilometres per hour over the speed limit.

“This is a man who had been driving for many, many years and had never transgressed,” Commissioner Callinan said.

He believed the cancellation of the points was completely legitimate and that the case was just one example of incidents presented publicly as incredulous or suspect that were found to be fair.

The comptroller and auditor general’s report on penalty points terminations, and the fixed charge system generally, over 2011 and 2012 was summarised before the Public Accounts Committee this morning. A number of key findings including:

- Two out of every three drivers paid their fines within the specified period and penalty points were added to licences where relevant.

- In a further 10 per cent of cases, fines were not paid on time and the cases went to court.

- “ Over 7 per cent of Garda notepad forms were unaccounted for and gardai were not required to account for every form. This created the scope for the process of penalty points being applied to a licence being discontinued without appropriate controls and outside of the formal cancellation process.

- The use of the fixed charge notice system did not comply with policy in a number of areas, including Garda members being able to terminate points on “unspecified discretionary” grounds over and above the exceptional circumstances stated in the policy.

- A significant number of the 3,000 cases that became statute barred in 2011 and 2012 did so because details from notepads were entered too late into the computerised processing system.

- Over 21 per cent of cases in 2011 and 2012 did not result in timely payment of fines meaning summonses were issued. However, more than half the summonses were never served meaning the cases were struck out. This resulted in a total of one in nine cases where the non-payment of a fine came with no consequence for the motorist.

- In total, some 600 vehicles had points terminated on three or more occasions in the two years examined.

- Some 1.2 per cent of total cases of fixed charge notices could not be pursued because they involved company cars where the company did not set out who was driving at the time. The comptroller and auditor general had first raised the issue in 2003.

- Some senior officers who had the facility to terminate points on the processing system were not confined to cases that had occurred in their own district or unit.

- In the Birr district in Co Offaly, the rates of cancellation were as low as 0.1 per cent but were over 5 per cent in Ennis, Roscommon and Sligo districts; “50 times higher” noted the comptroller and auditor general.

- In sample cases examined a “significant portion” of cases resulted in terminations under conditions that “do not satisfy the stated policy”. Records were “absent or inadequate”, giving rise to the suggestion that “cases have been terminated without due cause”.

- There were grounds for concern that points terminated by Garda members outside the district where the cases occurred “may have been terminated without proper authority”.

Commissioner Callinan is continuing to give evidence before the Public Accounts Committee this afternoon.