Woman aged 50 arrested in connection with killing of Belfast republican 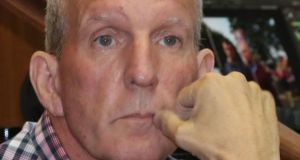 Mr Storey, a former IRA prisoner, was arrested along with republicans Eddie Copeland and Brian Gillen in Belfast on Wednesday morning.

“A 59-year-old man questioned by detective investigating the murder of Kevin McGuigan has this evening been released unconditionally,“ a police spokeswoman said on Thursday evening.

Mr Copeland and Mr Gillen were both released Thursday evening.

After 2 days in Antrim my client Bobby Storey has been freed. No evidence was put at any stage & my client will be suing for unlawful arrest

Earlier on Thursday, a woman was arrested by PSNI officers. The 50-year-old suspect was detained in Belfast in connection with the fatal shooting of McGuigan last month.

Senior PSNI officers have said the murder of Mr McGuigan was not sanctioned by the IRA, but one major line of inquiry is that members of the Provisional IRA were involved.

It is alleged to have been carried out in retaliation for the murder of another former IRA prisoner, Gerard “Jock” Davison, at his home in the Markets area of Belfast in May.

On Thursday evening Mr Storey’s solicitor John Finucane tweeted: “After 2 days in Antrim my client Bobby Storey has been freed. No evidence was put at any stage & my client will be suing for unlawful arrest.”

After his release, Sinn Féin leader Gerry Adams said “the unconditional release of Bobby Storey underlines the contrived nature of the current crisis in the political institutions in the North.

“I want to reiterate my grave concern about the nature in which the murder of two men has been exploited and also at the way the current difficulties have developed in the last few weeks, including the arrest of Bobby Storey.”