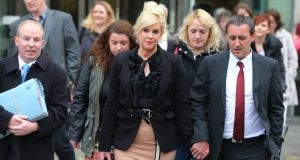 An anti-abortion campaigner involved in protests outside a clinic in Belfast was unlawfully issued with harassment warning notices, a court has heard.

Lawyers for the woman claimed at Belfast High Court that the police actions were procedurally unfair and breached her human rights.

She is seeking to judicially review the PSNI over being served with six separate Police Information Notices (PINs) — all since deleted.

The woman at the centre of the challenge has been granted anonymity.

Described as holding strong anti-abortion views, she was involved in “prayer vigils” outside the Marie Stopes clinic on Great Victoria Street.

Anti-abortion advocates have staged demonstrations and handed out leaflets at the centre, which offers sexual and reproductive healthcare and early medical abortions within Northen Ireland’s laws, since it opened in October 2012.

Charges can only be brought for an alleged course of conduct involving two or more incidents, with PIN notices often featuring.

It was stressed in court that the woman taking legal action has never been convicted or prosecuted for any incidents at the clinic dating back to 2014. She was accompanied by Mrs Smyth as the challenge got under way.

Her counsel, Fiona Doherty QC, acknowledged the PSNI has been dealing with a highly-charged, emotive situation with strong views on both sides.

“Police have to be very careful that their powers and duties are not used by them or exploited by someone else in an attempt to curtail or suppress lawful behaviour by those with opposing views,” she said. “They must act with scrupulous fairness and must ensure the right of citizens to engage in lawful behaviour is protected.”

Even though all six notices issued on her client have been deleted, Ms Doherty argued that the underlying information remains on the police database. The case continues.