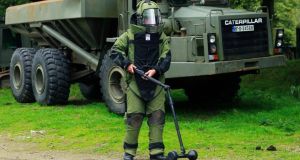 The devices were found at the property in the Aughnaskerry area on Saturday evening.

Following a request by gardaí, a bomb disposal team was deployed to the scene and the IEDs were made safe.

The devices were then removed to a military location for further examination.