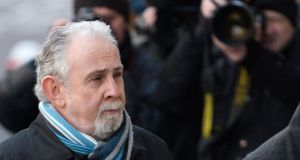 
The Police Service of Northern Ireland has accepted the blame for telling a Donegal man in 2007 that he was not wanted for prosecution for IRA offences when he was, in fact, still wanted for questioning about the Hyde Park bombing in London in 1982.

John Downey was stopped at Gatwick airporton his way to Greece for a holiday last May by a police officer after a computer check revealed he was listed as a suspect in the bombing, which killed four soldiers, left 31 injured and saw the deaths of seven horses.


Challenge
He challenged his prosecution on the grounds of abuse of process, insisting he was given a letter in 2007 by the Northern Ireland Office (NIO) that he did not face prosecution for any crimes committed during the Troubles.

However, the letter was based on faulty information passed on by PSNI assistant chief constable Peter Sheridan. The PSNI had dropped its own interest in him in connection with five incidents, but it did not tell the NIO of the Metropolitan Police’s continuing interest in him.

The desire that someone suspected of involvement in a serious crime should be tried “is a strong one”, said Mr Justice Sweeney in the central criminal court, but it was “very significantly outweighed” in this case.

Executive misconduct should not undermine public confidence in criminal justice, he said, adding that the public interest lies in “holding officials of the state to promises they have made in full understanding of what is involved in the bargain”.

“Hence I have concluded that this is one of those rare cases in which, in the particular circumstances, it offends the court’s sense of justice and propriety to be asked to try the defendant.”


Appeal
Mr Justice Sweeney’s ruling was delivered at the Old Bailey last Friday, but it could not be reported until it was known if the Crown Prosecution Service would appeal. Yesterday, the crown said it would not do so.

PSNI Chief Constable Matt Baggott said the PSNI took “full responsibility” for telling Mr Downey he was not wanted. The matter would be referred to Police Ombudsman Dr Michael Maguire. “I deeply regret these failings which should not have happened. ”

Mr Baggott’s predecessor, Sir Hugh Orde, who was in office at the time, said it was “a matter of great personal regret” a crucial oversight was made which resulted in erroneous information being sent to Mr Downey and thus prejudicing the indictment.