The woman, who is aged in her early 50s, was arrested under Public Order Act 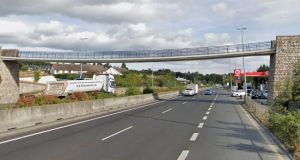 Gardaí in south Dublin received several complaints from members of the public about a group of people hanging large banners over the edge of the footbridge on the N11 at Kilmacanogue. Image: Google Maps

An anti-facemask activist has been arrested in Co Wicklow for a public order offence while hanging up signs directed against public health advice on Covid-19.

The woman, who is aged in her early 50s, has attended several anti-lockdown protests in recent months.

Gardaí in south Dublin received several complaints from members of the public about a group of people hanging large banners over the edge of the footbridge on the N11 at Kilmacanogue.

Gardaí attended the scene just before 4pm where, according to footage shared on social media, they began removing and seizing the banners over the objections of a small group of protesters.

A garda asked one of the protesters for her name and address under the Public Order Act which she refused to give.

She called the gardaí “traitors to the Irish people” and warned them they will “go viral”. The footage, which was shot by the woman, appears to show a brief scuffle involving the her and a garda before she is placed under arrest.

It is understood she was arrested under Section 24 of the Public Order Act which allows gardaí to arrest a person who refuses to give their name and address if they suspect an offence has been committed.

“Gardaí were alerted to an incident on the N11 flyover footbridge at Kilmacanogue as a result of a number of complaints received from members of the public earlier this afternoon, Friday, 28th August, 2020 shortly after 4pm,” a Garda spokeswoman said.

“Gardaí attended the scene and arrested one female (early 50s) under the Criminal Justice and Public Order Act, 1994. She is currently in Bray Garda station.”