Anglo executive given immunity deal by the DPP 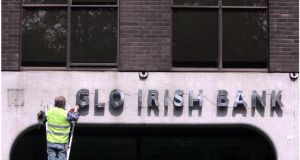 A senior executive at Anglo Irish Bank at the time of the bank’s collapse has been granted immunity from prosecution arising from the criminal investigations into the bank.

Matt Moran, Anglo’s chief financial officer when the bank was nationalised in 2009, received the immunity agreement from the Director of Public Prosecutions about two years ago.


Criminal charges
This was before criminal charges were brought against three former bankers as a result of the investigations. Their trial is due to begin early next year.

Mr Moran and his Dublin-based solicitors did not respond to calls and emails to their offices. The DPP would not answer any questions as to why the immunity deal had been granted.

“This office does not comment on individual cases,” said a spokeswoman for the DPP. “I would add that the case is of course pending before the courts and due for trial in January 2014.”

Mr Moran was the second most senior financial officer at Anglo Irish Bank.

After the bank was taken into State hands, Mr Moran was promoted to the role of director of group finance in February 2009 under new chairman Donal O’Connor before he left the bank later that year.

Mr Moran, who was never a director of the board of the bank, was best known for his “investor relations” role, dealing with shareholders, banking analysts at stockbrokers and the media.

He joined Anglo in 2002 and was a key member of the management team led by chief executive David Drumm after he took up the role of chief financial officer in 2004.


Anglo tapes
During 2008 he led the bank’s ultimately unsuccessful campaign to counteract the negative comment about the bank in the financial community as investors started to bet against the bank’s share price.

In recent years the former banker has been working in Luxembourg where he is chief executive of Lombard International Assurance, which offers investments to wealthy clients.

A chartered accountant from Castlebar in Co Mayo, Mr Moran featured in the recently published “Anglo Tapes” recordings of conversations between Anglo executives in 2008. The calls showed how the bank executives struggled to deal with a run on deposits and attempted to deal with the destabilising effect of businessman Seán Quinn’s large investment in the bank.

Asked this afternoon how he interpreted the decision to grant immunity to Mr Moran, Taoiseach Enda Kenny said: “I can’t comment on a decision of the DPP. That office is entirely independent. They make their own decisions.”

Separately, Fianna Fáil leader Micheal Martin said the DPP was an independent office and that he did not want to say anything that could jeopardise its work.

He said his sense of the public view was that people were “very anxious” any work done to date in relation to wrongdoing in the banking system should be properly prosecuted and dealt with by the legal system.


Bank guarantee
Mr Moran helped set up meetings between Anglo and Fine Gael’s Enda Kenny, then leader of the opposition, in late 2008 to push the bank’s interests within political circles. This followed the introduction of the State bank guarantee as the financial crisis deepened the government’s involvement in the banking sector.

Mr Moran also had contact with former Fianna Fáil TD Beverley Flynn, who like Mr Kenny is from Mr Moran’s home county of Mayo, on discussions with the then minister for finance, Brian Lenihan.

The trial of former Anglo directors and executives Seán FitzPatrick, Willie McAteer and Pat Whelan for providing unlawful financial assistance to 16 individuals – 10 long-standing customers of the bank and six members of Seán Quinn’s family – to buy shares in the bank is scheduled to begin in January.

Mr Moran liaised with the Financial Regulator and investment bank Morgan Stanley, which was advising Anglo, on the unwinding of Mr Quinn’s investment in 2008, a transaction that propped up the share price.