‘Two children in car’ that dragged garda along road

A Garda was injured in Tipperary after been dragged along by an SUV in a suspected drink driving incident. 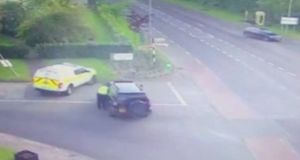 A videograb shows a garda approaching an SUV in Co Tipperary

A criminal investigation is underway after a Garda member was dragged along a road in Co Tipperary by a man in an SUV who refused to stop when gardaí approached.

The driver of the vehicle was being investigated as a possible drink driver after a tip-off from a member of the public. However, he refused to stop the vehicle, in which two children were travelling, for gardaí at two locations.

At about 5.50pm on Saturday, gardaí in a marked car responded to a call from a member of the public relating to a suspected drink driver. They saw a man getting into an SUV, who ignored efforts to stop him and drove towards Birdhill. When it reached a junction in the village, the SUV crashed into a sign post.

At that point a garda approached the vehicle on foot, making efforts to stop it. As he did, the driver reversed and then drove towards the Limerick Road, dragging the garda alongside the car for about 100m.

“The injured Garda was taken to University Hospital Limerick where it was identified that he sustained a broken ankle, numerous cuts and bruises and head injuries,” a Garda statement said.

A man in his 50s was arrested at the scene at about 6.50pm and has since been charged as the investigation into the incident continues.

The Garda Representative Association, of which the injured garda is a member, said he sustained injuries “the length of his body” during the incident.

“The incident near Birdhill in Co Tipperary, in which a garda was dragged 100m along a road by a reckless driver is an example of the bravery of frontline gardaí,” said the association’s general secretary Pat Ennis.

“The garda in this case was an experienced officer who was not only trying to stop the driver from endangering road users, he was also concerned about the safety of the two children in the car at the time.

“His efforts to stop the vehicle were above and beyond the call of duty and he has paid a huge price for his bravery. This was a life-threatening incident and while we don’t yet know the longer-term consequences of his injuries, he is likely to be out of work for some time.”