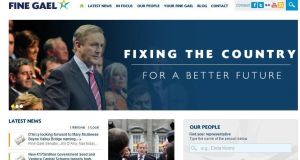 Two college students arrested on suspicion of computer hacking have been charged with criminal damage to the Fine Gael party website.

They have been charged with criminal damage to the Fine Gael website on January 9th, 2011, at Claregalway, in the allegation against Mr Martyn, and at Birr, in the case of Mr O Cearrbhail.

The pair were arrested by appointment at the Bridewell Garda station in Dublin by fraud squad detectives this morning and the charges were then put to them.

They were then brought to appear before Judge Patricia McNamara at Dublin District Court, charged under the Criminal Damage Act.

Det Paul Johnstone, from the Garda Bureau of Fraud Investigation, told Judge McNamara that Mr O Cearrbhail, who was wearing a check shirt and blue jeans, “made no reply to the charge after caution”.

Det Gda Marion Brennan told Judge McNamara that Mr Martyn, who was dressed in blue jeans, black jacket and black shirt also “made no reply” to his charge.

There was no objection to bail or legal aid being granted to the two young students.

The detectives told Judge McNamara that the Director of Public Prosecutions has decided that the pair should be tried by “summary disposal”, at District Court level, only if they plead guilty.

This means that if they are contesting the charges they are to be tried before a judge and jury in a Circuit Criminal Court, which, on conviction, can impose tougher sentences.

Judge McNamara set nominal bail in their own bonds of €200.

Defence solicitors Eugene Dunne and Matthew Kenny asked for discovery of the prosecution’s evidence. Mr Kenny asked for a copy of the full file that was sent to the DPP in relation to the caseto be handed over.

Judge McNamara ordered the gardai to furnish the documents sought by the defence lawyers and remanded the pair on bail to appear again in July when they will be expected to indicate how they intend to plead to the charges.

They spoke briefly during the hearing to say “Yes” when asked if they understood.