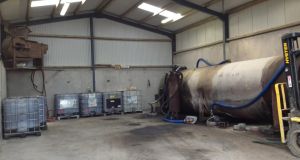 The plant in Drumacon had the capacity to launder more than 15 million litres of fuel per annum with a loss to the Exchequer of more than €8 million.

A Revenue statement said the facility was found following an “intelligence-led surveillance operation”.

A forklift, six vehicles and other equipment were seized. Some seven tonnes of toxic waste - the by-product of the laundering process - were also seized.

In a related search of a commercial yard in Longfield, a tanker with 20,000 litres of fuel, a trailer with a concealed tank and 68 bags of bleaching earth found.

Fuel laundering plants illegally “wash” agricultural diesel, which is marked with a dye and is sold at a reduced rate for use in farm vehicles, and sell it at a profit to general motorists.

Revenue said such vehicles pose a danger to vehicles. “It also takes much needed funds from the Exchequer; hurts legitimate trade and of course it is funding criminal activity,” the statement added.