Work to provide 950 new bikes to start in October 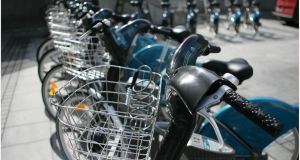 Approval for some 950 new bicycles and 58 additional hire points has been given.


Plans for the €35 million expansion of the Dublin bike scheme, with 950 new bicycles and 58 additional hire points, have been approved by Dublin city councillors.

Councillors last night ratified the plans, which will see the bike stations extended to Kilmainham in the west of the city and the O2 venue at North Wall Quay in the east. Construction work will begin in October and is due for completion by July 2014.

Under the original contract, advertising company JC Decaux provided 450 bicycles at 40 stations in exchange for the right to erect 72 advertising panels. The bicycles have been available for hire since September 2009 and the scheme has since been extended to 550 bicycles at 44 locations.

However, the new contract will not involve any additional advertising and instead the council will pay JC Decaux, €1.925 million a year for 10 years to run the service and maintain the bikes.

The council has secured €5.2 million from the National Transport Authority to cover most of the €6.1 million cost of installing the new stations.

The council does not propose to increase the hire tariffs, which include 30 free minutes. However it estimates it will need to find €500,000 a year to supplement the running costs. It hopes to secure advertising sponsorship to help reduce this cost.


Suburbs
Labour councillor Andrew Montague, who initially proposed the scheme in 2004, said the expansion east and west of the city centre was just the beginning of a plan to bring the bikes out into the suburbs.

“The 14-stage expansion plan will result in the availability of 5,000 bikes within the next four to five years.”

Councillors also approved plans last night for construction to start on the Sutton to Sandycove cycleway (S2S) around Dublin Bay, first proposed more than a decade ago.

Once complete, the S2S will provide a 22km continuous off-road cycle route around the bay. It would be one of the longest coastal promenades in Europe. The work approved by councillors last night will close the 2km gap in the current promenade and cycle path running from Clontarf to Sutton. The cycle path was put in place by the city council in the early 1990s but a gap was left between the Bull Wall and the Wooden Bridge because no solution could be found to building on the environmentally sensitive lagoon area.