It cost millions, but Eircode’s trumpeted benefits for business have not happened 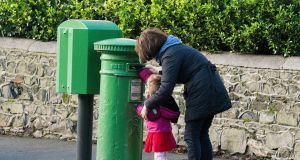 Eircode and Christmas cards: “We haven’t seen people using it,” says a member of a post office’s counter staff, who estimates that “about 2 per cent” of postage carried the code. Photograph: Dave Meehan

The post office in the middle of Ranelagh village in Dublin is busy with customers dealing with last-minute Christmas cards and parcels. Six people are in the queue. Four have letters to post. None of them has put an Eircode number on their envelopes.

In the two weeks after its launch in July, Eircodes were sent to 2.2 million homes and businesses and €350,000 was invested in an advertising campaign carried on TV, radio, print and online as part of its efforts to “become part and parcel of Irish life”. So far, judging by the evidence from Ranelagh and elsewhere, it has not happened.

“We haven’t seen people using it,” says a member of the counter staff, who estimates that “about 2 per cent” of postage carried the code.

Queuing to post Christmas cards, none of which carried an Eircode, Michael Doyle says jokingly: “I don’t even know my own.” He lives in a house divided into apartments. The building, he says, has received just one Eircode. Doyle grew up in Northern Ireland and still remembers the postcode of his childhood home, but he doubted if the Eircodes will be as memorable. “I prefer the old Irish place names, it helps you to place a person,” he adds.

Ireland was one of the last developed countries without a postcode system – the lack of which has been blamed for delaying deliveries, hindering the growth of online commerce and, occasionally, causing trouble for ambulances and fire brigades as they race to emergency scenes.

Eircode has drawn criticism for delays and mounting costs, but its managing director Liam Duggan insists that “significant progress” has been made. “It was always anticipated that full usage would not happen overnight,” he says.

A system of postcodes was first mooted in 2005 by the then minister for communications, Fianna Fáil’s Noel Dempsey, who pledged that the new codes would be in place by 2008.

The plan was not heard of again until Dempsey’s successor Eamon Ryan announced a restart in 2009, saying that it would be in operation by the end of 2011 with an estimated cost of between €10 million and €15 million. Four years and three ministers of communications later, it was finally rolled out.

A complicating factor was that more than a third of homes have so-called “non-unique” addresses, meaning that at least two properties share the same details. A straightforward area code would not work as it would only identify the area and not the house. Capita Ireland, the company which won the tender to produce the code, says that Eircode would solve this problem. Each house would have a unique code.

The seven-character alpha-numeric code is made up of two parts. The first, known as the “routing key”, has three characters and is the postal area governing that address. The second part is a “unique identifier”, a random set of numbers which pinpoints an address, distinguishing it from any other.

Ireland is the first country in the world to have such an individual unit locator, says Minister for Communications Alex White, who said at the July launch that Ireland had “leapfrogged older designs, like the one used in the UK”.

However, the random nature of the code has come under fire for being too complicated. Houses in the same area do not have numbers in sequence. Saying the Government “has got it wrong”, Ryan says the codes cannot be easily remembered.

White has argued that delivery companies will be the biggest beneficiaries, while Duggan cites logistics companies, insurance and telecoms firms as quick adopters. However, the main organisations representing freight and haulage companies disagree.

Neil McDonnell, general manager of the Freight Transport Association of Ireland, whose members include the global delivery firms DHL and FedEx, says that as far as he knows, none of the association’s members is using the code. “The nature of a postcode as a random code is the significant problem. It is essentially a social security number for a property,” says McDonnell. “The code itself is a meaningless construct.”

Describing it as “worthless”, Irish Road Haulage Association’s president Verona Murphy says it was designed “as a system that only An Post could use” and it is “useless” for anyone else. “There was no input from those whom it’s supposed to service.”

However, one group is more optimistic. Retail Ireland, the representative body for Ireland’s retail industry, says the unique identifier can “reduce costs” for them through “supply chain and administrative savings”.

Despite plans to combine Eircode with online maps and satellite navigation systems, this has yet to happen. Put Eircode into Google maps today and it says, “No results found”. Duggan says it will be integrated with sat-nav systems shortly.

Meanwhile, the Health Service Executive, which runs the National Ambulance Service, believes Eircode “will be of particular assistance in rural Ireland where the same townland name can pop up again and again”. However, this has yet to be tested. Eircode will not be built into despatch systems until the new year.

Not everyone within the emergency services has been as welcoming. John Kidd, president of the Irish Fire and Emergency Services Association, says staff workers use smartphones to find addresses. So far, Eircode cannot be used for this. “I’m not against technology, but for technology that works,” he says.

Letters published in The Irish Times in the weeks after Eircode’s launch complained of addresses being listed in the wrong place or even the wrong county. One writer complained that his Leixlip home was listed as being in Naas. Shannon Airport, meanwhile, is said to be Co Limerick, rather than Co Clare.

“No one has changed the location of Shannon Airport,” says Angus Laverty of An Post. The airport’s post comes from Limerick, its post town, and this is why it is in the postal address. “We haven’t shifted the county boundaries,” he says.

More serious issues have been raised about Eircode’s costs. Forecast at €18 million, comptroller and auditor general Séamus McCarthy put the final bill at €38 million. “It is not clear that benefits-to-the-value-projected will be achieved,” his report declared. However, Capita insists that progress is being made, saying that nine out of 10 knew of it in the first month.

In the end, says Neil McDonnell, it will be the public that will decide Eircode’s final fate.