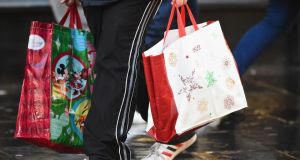 Irish retailers enjoyed a pre-Christmas windfall over the weekend with overall sales said to have approached some €400 million. Photograph: Getty.

Irish retailers enjoyed a pre-Christmas windfall over the weekend with overall sales said to have approached some €400 million.

The advent of “Panic Saturday”, as some commentators dubbed it, saw shoppers throng high streets and department stores as the final run in to Christmas began, and researchers expect the bumper sales figures to be replicated over the coming days.

“We were anticipating a spend of about €400 million for the weekend, and we haven’t heard a whole lot to the contrary about that,” said Seán Murphy of retailers’ umbrella group Retail Excellence Ireland (REI).

Following reports from a UK-based market research firm, which expected sales in the region of £1.2 billion (€1.5 billion) for businesses on Saturday alone, Mr Murphy said he was confident of a continued upward trajectory for Christmas spending this year.

“The sense was that a lot of spending decisions were brought forward by things like Black Friday, and that there’ll be a lot more spending to come in the post-Christmas period,” he said. Mr Murphy said an increase in promotions earlier in the shopping season has led to a “frontloading” of consumer activity.

According to sources, department stores such as Brown Thomas, Debenhams and Arnotts were the big winners over the course of the weekend, with shoe retailers also performing strongly.

Staff in Dublin city centre described a “manic” atmosphere as crowds descended on shops (Sunday), with parents and children having to endure a three-hour wait to see Santa in one department store.

The news comes in the wake of a recent survey released by retailer Argos Ireland, which indicated that Irish people will spend an average of €430 on gifts this year.

It complements similar figures released by Retail Ireland detailing an extra spend of between €650 and €750 by Irish households for the month of December, as businesses look forward to a Christmas market worth nearly €4 billion- which would be the best showing since 2009.

“Retailers have had a tough four or five years, and this is the first Christmas they’ve really had reason for optimism and a bit of positivity,” said Graeme McQueen of the Dublin Chamber of Commerce.

“There’s been a steady run of days taking place like Black Friday and Cyber Monday, and shops are having sales earlier and earlier to try and get people to spend, so I think that’s worked very well,” he added.

Stats compiled by REI for the first half of the Christmas trading period showed that shops in Dublin reported adverse figures due to the water charges protests held earlier this month- a situation that was offset by heightened spending caused by the teacher’s strike on December 2nd.

“It was a combination of teacher’s strikes plus child benefits payments coming on the same day. Right across the country feedback was uniformly positive in terms of spend locally and nationally,” said Mr Murhpy, whose organisation attributes the recovery to factors such as rising employment and greater levels of disposable income.