Meat and cancer link will not hurt exports, says Hogan 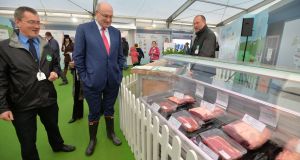 A controversial report putting various meat products in the same category of cancer risk as tobacco and asbestos will not impact on Irish exports, EU agriculture commissioner Phil Hogan has said.

The World Health Organisation (WHO) research published last week provoked considerable public concern when it said red meat such as beef and lamb were “probably carcinogenic”, linking consumption to higher risks of pancreatic and prostate cancer.

However, Mr Hogan has moved to quell industry fears from the report’s fallout during a speech to the annual Irish Co-operative Organisation Society conference in Dublin on Tuesday.

“Our meat products are the very best in the world,” he said of wider-European production.

“My services and I have taken note of the recent WHO report and we do not believe it will have any meaningful impact on sales of our high-quality, traceable meat products.”

Mr Hogan limited his comments on the subject to just that, although they follow clarification from the WHO itself which said the message contained in its report had been “misinterpreted”.

Elsewhere, in a broad speech on European agriculture, Mr Hogan said the “era of quotas is over” and the future is about new markets and financial investment.

The EU is now the world’s largest trader of agri-food products with exports totalling €122 billion and imports €104 billion.

“We have had an increasingly positive trade balance since 2010 and last year we maintained our good export performance even despite the Russian ban [on imports following international sanctions imposed against it],” he said.

The market future will be shaped by an expanding global middle class, he said, whose growth in disposable income will result in significant changes to dietary patterns and demand for higher quality food.

“Opening up new markets will be a key priority in the coming years. We are optimistic about finding new markets for our products – perhaps within the EU, but also elsewhere in the world such as the Far East,” he told delegates.

Trade agreement has been secured with South Korea while talks are ongoing with Vietnam and Japan; a free trade deal with the latter, Mr Hogan said, would represent “huge prospects” for the beef and grain sectors.

Next year he is to visit a number of countries on a “diplomatic offensive”, beginning with Columbia and Mexico in February.

On the issue of finance, he said: “European dairy farmers will soon be able to make use of volatility-proofed loans. The opportunity to make progress on such a tool has been one of the themes of our engagement with the European Investment Bank.”