Travelling light, using specialist websites and apps, and booking with different airlines to and from your destination: these are just some of the ways you can fly for less 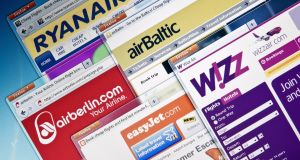 When booking, bear in mind that you don’t have to take the same airline to and from your destination. Photograph: Thinkstock

1 The last-minute wonder deal is the holy grail for many travellers, and it can work. You might leave it until the very last minute and then get a really cheap seat on standby flying to the exact location you want to go to at exactly the time you want to go. But you probably won’t. And if you don’t, you could end up paying a grossly inflated fare or not going anywhere at all.

2 The general rule is that prices go up incrementally as the date of departure comes closer. Ryanair’s Michael O’Leary – a man who knows a thing or two about setting air fares – has said that booking a flight six to eight weeks before departure is the way to get the best deal.

3 O’Leary is not the only voice worth listening to, however. Some aviation experts have a theory that airlines’ automated systems dump blocks of unsold seats on Wednesdays between midnight and 1am in the time zone of their home city. So if you are flying to Thailand and are looking for the cheapest deal, look at 5pm Irish time on Tuesday evenings. We’re can’t say if it works, but it is worth a try. And if it does work, let us know.

4 For that trick to work, you might need to erase your browser history. One of the persistent online rumours about air travel goes that the more you visit an airline’s website and look up a particular fare, the higher the prices go. The conspiracy theorists blame cookies. These small pieces of computer code track us as we surf the web. Every time we visit a website, it checks to see if it has left a cookie on our computer. This can be helpful, as it allows us track items we put into a shopping cart and it means we don’t have to repeatedly log into sites each time we visit. Of course, that cookie could also tell an airline if we are really interested in a particular fare and therefore willing to pay more. So if repeatedly checking a particular flight, try using the incognito or private-browsing mode or clear your cookies. It won’t cost you anything and might save you money. Airlines repeatedly rubbish this theory.

5 While the existence of dodgy cookies pushing prices up is by no means certain, the day you fly can certainly make a massive difference to the price you pay. Many holidaymakers are conditioned to fly at weekends. And business travellers tend to fly Mondays and Fridays. So the cheapest days to fly are Tuesdays, Wednesdays and Thursdays. A couple of years ago, the British consumer group Which? reported that a family of four could knock almost €1,000 off the cost of a fortnight in the sun simply by moving the day of departure from a Saturday to a Thursday.

6 Skyscanner allows you to search across multiple airlines at the click of a mouse. Its Irish arm also recently crunched some numbers in order to find out the best time to book a flight. It says booking seven weeks in advance is the minimum time you should leave it to make sure you bag the cheapest flights to many popular destinations. But how many weeks in advance you should book your flights varies according to the destination. If you are flying to Paris, you can make savings of up to 45 per cent by booking seven weeks in advance, whereas travellers can save 9 per cent on the average flight price to New York if they book 17 weeks in advance. If you book a flight to Bangkok 20 weeks out you will save a paltry 3 per cent.

7 As well as the day, the month you fly can make a huge difference to the price. Skyscanner says November is the cheapest month to travel from Ireland: savings of up to 14 per cent can be made compared with average price flights. July is by far the most expensive month to travel. That said, two weeks in Torremolinos in November does not sound like much fun, now does it?

8 When making your booking, bear in mind that you don’t have to take the same airline to and from your destination. The days of getting cheaper flights when booking return flights are long gone, particularly if you are flying short haul. It is quite possible that it will be cheaper to fly out with Aer Lingus and home with Ryanair or vice versa. Airlines do not tend to reward passengers for loyalty so why should you show them any loyalty?

9 Another habit to break when flying long haul is not being flexible about the departure airport. Many Irish fliers – even frequent ones – look no farther than Irish and British airports. Don’t be one of them. Paris, Amsterdam and Frankfurt often have much better deals and can be very cheap to get to. Better still, if you are flying to the Far East, look towards Helsinki. Finnair flies from Dublin to the Finnish capital, and there are a large number of connections from there to the Far East. The airport is much easier to navigate than Heathrow, which means that making connections is much easier and less stressful. And it might just save you money.

10 There are any number of specialised search engines dedicated to finding the cheapest flights available. You could try matrix.itasoftware.com, which searches other airfare search engines. We tried it last week and it was able to knock more than €100 off a flight from Dublin to Barcelona. However, that meant having to go via Geneva, and the flight took eight hours. There is also skyscanner.net, which searches all airlines, and momondo.com.

12 It is not all about price. If you are flying long haul, in particular, you should also look into which airlines offer the best entertainment options, the best meals and best seats. On Thai Air is top dog, with a happiness rating of 8.1 (and high fares to reflect that status).

13 It would be infuriating to make significant savings on your flights and then waste all the gains by not being more clued-in when it comes to packing or parking. If you are driving to your departure airport – and always ask yourself if you would be financially better off taking a cab – make sure you pay for your parking well in advance. It will make a difference. You can pay as little as €10 for a day’s short-term parking in Dublin Airport, or as much as €40, depending on if and when you book. And in the long-term car parks, you could easily knock as much as €5 off the daily rate by booking in advance. Over the course of two weeks, being savvy could save you €70.

And once you have the parking sorted, you will need to take on your luggage. Or carry it on, to be exact. The simplest way to make easy savings – particularly if you are travelling as part of a large group, or even two adults and two children – is to pack light and don’t check any baggage in. The airlines increase their checked-in baggage charges at peak season. Aer Lingus, for example, charges €20 for a 20kg checked-in bag in low season and €35 at peak times. That is per leg. So two adults and two children checking in a bag each going to and from a destination at high season will add €280 to their overall costs by not travelling light.