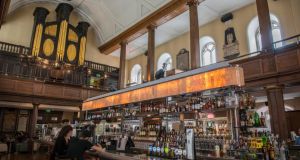 St Mary’s church, on the corner of Mary Street and Jervis Street, was deconsecrated in the 1980s and currently operates as The Church bar and restaurant. Photograph: Brenda Fitzsimons 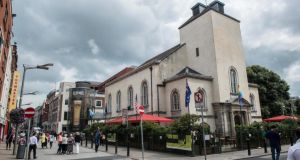 St Mary’s church was built between 1697 and 1702 and served the local Church of Ireland congregation until 1986. Photograph: Brenda Fitzsimons

British pub chain JD Wetherspoon has set its sights on a 17th century former church where Arthur Guinness was married as the location for its first branch in Dublin city centre.

St Mary’s church, on the corner of Mary Street and Jervis Street, was deconsecrated in the 1980s and currently operates as The Church bar and restaurant.

Wetherspoon, which operates more than 900 outlets in Britain and Northern Ireland, opened its first pub in the Republic, the Three Tun Tavern, in Blackrock, Co Dublin, last month. The chain plans to open 30 outlets across the State and has secured pubs in Cork, and Dún Laoghaire and Swords, in Dublin.

The group is now seeking a site in the city centre and is understood to be interested in acquiring the Church bar.

St Mary’s church was built between 1697 and 1702 and served the local Church of Ireland congregation until 1986. Over the following decade it was used by the Greek Orthodox church, a dance school and a painting and decorating shop. It fell into considerable disrepair.

Over its 300 years the church had many famous parishioners, including playwright Sean O’Casey and United Irishman Wolfe Tone, who were both baptised there. Brewer Arthur Guinness was married in the church in 1761.

Wetherspoon does not stock Guinness in its Irish outlets, although it does offer it in its British pubs.

The company is involved in a price dispute with Diageo and is not stocking any Diageo-distributed products including Guinness, Budweiser, Carlsberg or Smithwicks in any of its new Irish premises.

The company said it did not want to pay more for Guinness in Ireland than it did in Britain. It is not known if Wetherspoon will make an exception if it acquires the Mary Street pub given the associations with the famous brewer.

Mr Flynn said he did not wish to comment on the Wetherspoon’s bid but said the Church offered traditional Irish hospitality. “We are a community-focused, family business and we have great links with other businesses locally. We are involved in many tourism and cultural events in the city, and we have wonderful, dedicated staff.”

Wetherspoon says it has a strong emphasis on food service and operates a regime to prevent drunkenness and disorderly behaviour.

It also operates a proof-of-age policy, including “mystery visitors” to test that alcohol is not served to minors.