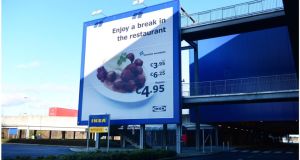 A poster at the Ikea store in Ballymun in February showing the meatballs which were removed from its menu. Photograph: Bryan O’Brien

Media reports on January 15th, 2013, that beef burgers being sold by retailers such as Aldi and Tesco contained horse got immediate global attention.

In the following weeks Burger King announced it was no longer buying burgers from Co Monaghan-based Silvercrest Foods, concerns were raised by Findus about its beef lasagne, and Nestle said it had discovered traces of horse in food products it was selling in French, Italian and Spanish supermarkets.

As news emerged of horsemeat that was labelled as beef travelling from Poland to Ireland via the UK before being made into frozen burgers, consumers’ trust in some of the world’s major food and retail brands took a battering.

In February, Czech authorities discovered horsemeat in Swedish meatballs produced for the furniture giant Ikea and labelled as beef and pork. The company withdrew the popular product from sale in countries across Europe, including Ireland, for almost a month, before reintroducing the item having established a tighter supply chain for its ingredients.

Frozen burgers
According to David Berry of Kandar Worldpanel, which monitors the retail sector, sales of frozen burgers by Irish multiples fell sharply after the scandal. In the four weeks ending February 17th, sales fell 42 per cent. However they have since recovered much ground.

“There has been a long-term impact, with levels not back to where they were. The hardest hit are the own-brand burgers.”

He says the impact extended beyond burgers to other areas of the frozen food sector, such as pizzas, as well as into the chilled convenience foods sector. “Overall there has been a shift to fresh products.”

Yet, one year on, the commercial impact on the companies affected looks minimal, while the impact of the scandal on business practices and consumer attitudes is just one contributor to a constantly altering landscape where shoppers are constantly seeking value while demanding quality.

The scandal began when the Food Safety Authority of Ireland published data showing frozen burgers containing horsemeat were on sale in Irish outlets of Tesco, Dunnes Stores, Aldi, Lidl and Iceland supermarket chains. While the levels of horse were low in most of these outlets, the level in the Tesco burgers was 29 per cent.

The value of Tesco’s shares on the London Stock Exchange dropped as investors fretted that the scandal would so damage the retailers’ image it would have a significant impact on profitability. However the investors were wrong to be concerned, and figures released in June showed the scandal had only a “small but discernible impact” on its frozen and chilled convenience food sales.

Likewise with Greencore, an Irish convenience food company quoted on the London Stock Exchange and headed by Patrick Coveney, brother of Minister for Agriculture Simon Coveney. Greencore’s shares fell by 20 per cent in February 2013 after it was announced it supplied a beef bolognese sauce withdrawn by Asda on the grounds that it contained horse.

Greencore said it had bought the meat from a Larry Goodman ABP plant in Nenagh, Co Tipperary, but ABP said it was not the source of the horse. Tests a fortnight later showed the initial scare was ill-founded.

The Greencore share price fell by as much as 20 per cent after the initial announcement, and remained below pre-scandal levels for some time.

“The initial fear was that sales of chilled ready meals to UK retailers would collapse,” says Liam Igoe, an analyst with Goodbody Stockbrokers. “Since the initial scare matters have recovered somewhat. The position is not fully back to where it was. But it is less bad.”

He said when the next set of figures for the plc’s trading performance were released some months after the scare there was general surprise that the effect had not been greater.

Total turnover
Ciara Jackson, head of the food and beverage division at Grant Thornton, says Greencore lost an estimated €15 million of turnover as a result of the scandal. This is in the context of a total turnover that grew to €1.2 billion in the year concerned.

Agri-food economist and chairman of Meat Industry Ireland Ciaran Fitzgerald says the latest figures on Irish food exports show the scandal had little or no impact on the industry, particular on beef exports.

One impact of the scandal was to bring a focus on retail chains selling packs of eight frozen beef burgers for €1 at a time when beef was selling at approximately €4 a kilo. “There was a disconnect there, and the retailers bare a lot of the responsibility because they control prices.”

Three multiples – Tesco, Dunnes and the Musgrave/ Supervalue group – control 80 per cent of the Irish retail market. “Economy offerings cannot be out of kilter with commodity prices. That is something retailers have to keep an eye on.”

When the finger of blame was pointed early on at the ABP subsidiary Silvercrest and its plant in Ballybay, Co Monaghan, most members of the public were astonished to learn of how meat processed there came to the plant by way of suppliers around the UK and continental Europe, often with intermediary traders involved.

A picture of a complex supply chain emerged that was at odds with retailers’ and producers’ ability to make claims as to the source and quality of their product.

“There is a lot of assessing going on in relation to supply chains,” says Fitzgerald. “The supply chains are shortening, but that is a process that has been going on since the BSE crisis in 1996.”

Serious approach
Ireland’s role in initially identifying horse in supposed beef products on sale throughout Europe has helped to boost its image as a jurisdiction that takes a serious approach to food.

“The importance being given to food safety by the Irish authorities is working out well for us,” says Jackson.

In general the food sector reacted quickly to the crisis and the best operators in the business are using it to their advantage. “The smarter businesses are leveraging the higher levels of regulation, and can build the associated premium into their price.” Consumers, she says, are willing to pay that bit more to get something they can feel more assured about.