For one week only, Pricewatch resolved to rely on own-brand products sourced in Aldi to feed a family of four 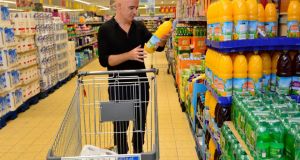 Switch to own-brand and save is the message that retailers are selling in these cash-strapped times. They point out that by doing so, Irish consumers could cut their household bills by hundreds if not thousands of euro every year. But do the numbers stack up, and what happens if you make the switch?

For a week, Pricewatch resolved to rely on own-brand products from Aldi to feed a family of four. The results were mixed. Our experimental shop was done in the company of two executives from Aldi. Full disclosure: they picked up the tab.

Breakfast
First, breakfast. In an attempt to curry favour with small people, Pricewatch decided to go for knock-off Crunchy Nut Cornflakes and own-brand wheat biscuits as opposed to the more utilitarian porridge option. The results were mixed. The cornflakes (€1.49 a box) were very cheap – Kellogg’s cost €2.99 – but they were also pretty miserable and we wouldn’t buy them again. The wheat biscuits were more pleasing. They taste identical to Weetabix. They cost €2.19 for 36, while the same number of the better-known brand costs €5.88.

With breakfast barely finished we have already knocked €8.69 off our weekly shop: spread out over a year, this amounts to savings of €451.82, although we’re not sure we could stick with the soggy cornflakes for that long.

After breakfast we brush our teeth. A family sized tube of Aldi’s Péarla toothpaste costs €1.29. It isn’t the zingiest toothpaste ever, but it is much cheaper than a similar quantity of a branded version at €3.35. The alcohol-free mouthwash is a different story; it is not to our taste at all even if, at €1.99, it is €1 cheaper than the cheapest of the better-known brands. By switching just these two products, the potential savings each year would be €159.12.

Lunch
With teeth cleaned, lunches for small folk are next. Aldi’s Parma ham was excellent value, at €2.59 a packet. The cheapest we can find it elsewhere is €3.99. We also bought a of cheese. Aldi’s vintage option costs €2.79 a block. Kilmeaden is €2.99, so there are no great savings there.

A pound of Aldi butter costs €2.19 – Kerrygold is €2.95 – while all the bread and bagels needed to feed two small children during their primary-school day will cost €2.89. Buying branded would set us back €5.95. We also buy 10 child-sized 10 apples – two each for five days – for 69 cent, compared with €3 when we go the pricier route, so the total cost of lunch for two children for five school days relying exclusively on own brand is €11.15 compared with €18.88 using the alternative. This is a saving of €7.03, or €356.56 a year. Admittedly, the rolls lack texture and taste, but the bagels are fine. The apples are not high-end but are a fraction of the cost.

Enough Bolognese for four, with leftovers, can be cooked pretty cheaply out of Aldi too. At 49 cent the fusilli is bargain basement. It is also bad – a poor relation of De Cecco or Barilla. It was not much worse than Roma, though, which costs €1.29. (If you want good own-brand pasta at a good price, you can’t beat M&S.) The minced beef is €3.99 for 600g, or €6.65 a kg and, while fatty, it was pretty good. The other ingredients: tomato puree (45 cent) and tinned tomatoes (55 cent) were twice the price when brand names featured.

There is little by way of branded mince in Irish shops, so we compare it with Brady’s butcher’s in Drumcondra, which is selling 3lb (1.4kg) of steak mince for €9.95. That works out at €7.10, but the beef is much better quality than that in Aldi.

Dinner on day four comprises six salmon fillets, at a cost of €7.18; about €6 less than the cheapest fillets elsewhere. We also have mashed potato, frozen corn on the cob and a bagged bistro salad. The Aldi corn is €1.25 and one bag is enough to feed four. It is excellent. Green Giant corn, meanwhile, would have cost €3.35; that difference is hardly jolly. The potato costs another €1.20, and is good too. The bistro salad is fine, but at €1.49 it is 10 cent dearer than a comparable option from Florette. The salmon is poor and very fatty. The cost of the Aldi fish supper is €11.12, a saving of €6, but it isn’t anything special.

The final tally
The amount spent on own-brand products where branded equivalents are readily available is €79.10 compared with €108.29 had we stuck with the familiar products. This is a saving of €29.19 a week. Over a year, the savings amount to €1,517.88. After tax. We should also point out that other chains, including Tesco, Dunnes Stores, Lidl and SuperValu, have extensive own-brand options.