Wholesalers to share building with a continental-style market and cafes 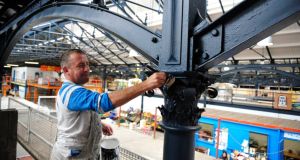 The Victorian fruit and vegetable market in Dublin’s north inner city is to be redeveloped as a continental-style food market more than a decade since its regeneration was first proposed.

Dublin City Council has drafted plans for the refurbishment of the market hall between Capel Street and the Four Courts. It intends to go to tender for contractors by the end of this year, with work due to start by autumn 2014. The council hopes to have retailers on site in the newly restored hall by summer 2015.

The building, which was built in 1892 and is on the Record of Protected Structures, has 6,000sq m of internal space, currently devoted to wholesale. Under the new plan, the wholesalers, who serve surrounding restaurants and shops with fruit and vegetables, will move to the western half of the building.

The remaining half of the market will be devoted to a retail food market that includes butchers, bakers, cheesemongers, fishmongers, and a range of other food producers, as well as greengrocers. There will also be space for cafes at the edges of the market and in buildings bordering the market.

The regeneration of the market has seen several false dawns. A scheme was drafted for the council in 2002 which featured the refurbishment of the market as one element of a huge retail, apartment and office complex of up to six storeys in height with a new civic square and a leisure centre.

2007 plans
In 2007 a consortium led by Paddy Kelly, one of the principal developers involved in the regeneration of nearby Smithfield, was selected by the council as the preferred bidder for what was then a €425 million project.

Restaurateur Patrick Guilbaud and Fallon & Byrne – a restaurant, wine bar and high-end grocers on Exchequer Street in Dublin 2 – were identified as potential anchor tenants, but contracts were never signed.

Two years ago, the council announced plans to develop an “artisan” food market in the Victorian building. What it now intends to develop has evolved from that plan, but is something more robust, according to the executive manager of the council’s planning department, Jim Keogan.

“We are going to be very careful about the composition. We want a good mix of different types of food retailer, and we hope the wholesalers, who are staying, will take the opportunity for retail as well. We’re not looking to create something exclusive. This will be an everyday market for everybody.”

The council is currently refurbishing the roof and replacing the electrics at a cost of €1.5 million. However, bringing it up to standard for retail requires material changes, which need to be sanctioned by councillors.

“We have to make sure everything is done to the highest specifications, we can’t just put up a few Portaloos. There will be a need for vents for any hot food operations, coolers, freezers, upgraded toilets. It will be costly, but if we’re going to do this, we have to get it right.”

Public support
The council has yet to cost the work, a process that will form part of the tender for construction, but Mr Keogan said he was confident the investment was sound. The council commissioned retail analysis which found 82 per cent of people wanted a food market, 65 per cent wanted it at the Victorian market and a further 15 per cent would be supportive if issues such as accessibility and parking could be resolved.

“We will be spending serious public money, so we need to make sure we had the evidence to substantiate that spend. We have the evidence, now we have to develop a market which is a destination in its own right.”