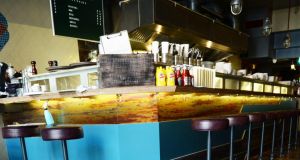 The Food Safety Authority of Ireland issued the order for the Damson Diner on South William Street in Dublin 2 on Monday April 14th and lifted it on Wednesday April 16th. Photograph: Cyril Byrne / The Irish Times

A Dublin city centre eatery is among five food businesses where closure orders were issued by the Food Safety Authority of Ireland last month.

Environmental health officers issued the order for the Damson Diner on South William Street in Dublin 2 on Monday April 14th and lifted it on Wednesday April 16th. It was one of three eateries closed under the Food Safety Authority Act 1998.

The bar serves classic American diner food, as well as having a full bar and a night club, according to its Twitter account. In response to customer queries about the closure order Damson Diner tweeted: “We’re in an old Georgian building and had to close for a day to do repairs. All sorted now, thanks 4 concern”.

Co Louth restaurant, Rice Asian Kitchen in Ardee, was also forced to close for over a week after a visit by inspectors. The order was served on April 7th and lifted on April 17th.

Co Wexford eatery, Mo’s Kitchen in Larkin’s Cross, Barntown, Wexford was also issued with a closure order and closed for a day in early April.

The ground floor kitchen of the Red Parrot pub on Dorset Street , Dublin 1 was also closed for a few days.

A successful prosecution was also carried out last month by the HSE (Health Service Executive) against Chinese restaurant and take-away, Dynasty, at College View, Ballymun, Dublin 11. The proprietor was convicted and fined € 750 for offences and costs of € 2,500 were awarded to the HSE

The number of ongoing cases involving “improper storage of foodstuffs and poor cleaning and sanitising” was particularly disappointing, Food Safety Authority chief executive Professor Alan Reilly said. Greater vigilance was needed to ensure standards were not allowed to slip and pit consumers at risk, he said.

The Food Safety Authority of Ireland has issued 28 closure orders so far this year. Last year the number of enforcement orders taken against businesses for breaching food safety laws was up by 31 per cent , hitting a record of 143.