Cyber Monday: More than €40m likely to be spent in sales blitz

Cyber Monday picks up online where Black Friday left off offline, and savvy Irish consumers are likely to avail of offers in growing numbers

Amazon promotional video has unveiled what its unmanned drones for package delivery would look like. Video: Reuters 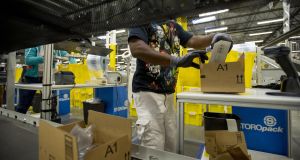 An Amazon employee loads a box with merchandise ahead of Cyber Monday last year. Amazon is likely to be the most popular site for Irish Christmas online shopping, a recent survey found. photograph: David Paul Morris/Bloomberg via Getty Images

Cyber Monday is neither a tradition nor something that happened naturally. It was utterly contrived 10 years ago through a simple press release from a hugely powerful right-wing retailing lobby group in the US.

“While traditional retailers will be monitoring store traffic and sales on Black Friday, online retailers have set their sights on something different: Cyber Monday, the Monday after Thanksgiving, which is quickly becoming one of the biggest online shopping days of the year”, was how the release sent by the National Retail Federation started.

It could have died a death and ended up on the scrap heap of rubbish PR ideas, but it didn’t. It struck a chord with US consumers and quickly gained traction. In 2005 Cyber Monday sales were $484 million (€457 million) in the US. By 2012 online sales on the day had more than tripled to $1.465 billion, while last year sales in the US topped $2 billion. That means that more than $2,300 was spent across the US every second on the big day.

It wasn’t so mental in Ireland, but Irish consumers still managed to spend an impressive €39 million on Cyber Monday 2014. Assuming that sales increase this year – and all the estimates suggest they will – more than €40 million will be spent online today.

That is around a tenner for every man, woman and child in the country.

Sales of this level are happening despite the fact that Cyber Monday is the lesser known of the shopping days that have been bestowed with a special title.

While 73 per cent of Irish people have heard of the Black Friday, which has just passed us by, only 34 per cent said they were aware of Cyber Monday, according to a survey published this month.

While most people may still not have heard of the notion, the number of people seeking to taking advantage of bargains online is growing fast, and more than a third of all Irish consumers will buy at least one present online this year.

And speaking of taking advantage of, where there are people spending money there will be criminals, and it is important to remember that bad things can happen when you shop online.

According to figures released by the PSNI last week, the most common time for victims to have first contact with a fraudster last year was between Black Friday and Cyber Monday.

“This serves as a warning to consumers to be extra vigilant on these key Christmas shopping days, as online fraudsters are watching and waiting to capitalise on the biggest shopping frenzies of the year,” said Ian Wilson of the PSNI’s economic crime unit.

That is not to say criminals are lurking behind every virtual corner, and a few basic steps should see you through. Some of these have been identified by the European Consumer Centre (ECC), a pan-European organisation that directly engages with consumers and helps to fix problems when cross-border barneys erupt.

Seeing as how many of the online purchases made today will involve retailers outside of this jurisdiction, it is the ECC that is likely to have to pick up the pieces for consumers if things go wrong, so it is worth heeding what it has to say.

Irish consumers are among the most mobile in Europe and about 18 per cent of Christmas online sales in Ireland will be made from a mobile device. Most smartphone users have no malware protection on their device, which means you need to be just a bit careful.

The ECC advises consumers not to click on links or attachments in unsolicited texts or emails. Storing personal information such as account names or passwords on devices should be avoided, and consumers should be cautious when accessing sensitive information on a public wifi network, as these tend to be riskier than private networks.

It also suggests that consumers do a bit of research into the bona fides of online traders before buying anything. Under EU legislation, traders must provide full contact details, including a postal address. The simple act of Googling a company’s name is likely to throw up any serious problems.

Using websites such as whois.com you can check where and when a website was registered, and remember an address associated with a particular country, eg one ending in .ie or .co.uk, does not necessarily mean a site is based in that country.

EU consumer legislation covers member states and some other European countries. If you buy from websites based outside of Europe, your EU consumer rights are unlikely to apply.

Despite potential issues, more than two-thirds of Irish consumers said they would shop online for Christmas presents this year, with better value said to be the main reason, according to a survey published by the Irish League of Credit Unions. Amazon is still likely to be the most popular destination for Christmas shopping online, the survey found.

While most consumers shop online to save money, doing so actually gives them more rights than they have if they buy from a traditional retailer under the consumer rights directive that came into force last year.

If you buy something online and it is faulty, then you have exactly the same rights as if you had bought it in a shop. Under the directive, an online seller must give you specific information, including the price, any taxes that may fall due, delivery costs and details of what to do if you change your mind.

You also have a cooling-off period of at least 14 days, starting from the date you receive the order. Before the end of the 14 days, an order can be cancelled and the item returned.

Critically, during this cooling-off period you can return the item for any reason. But if you cancel the order because you change your mind, you may have to pay for the cost of returning it.

You also have extra rights if your goods are not delivered on time. Generally speaking, online retailers have 30 days to get your stuff to you unless you agree otherwise.

Cleaning up: The sites gearing up for Cyber Monday Companies taking part in Cyber Monday were reluctant to disclose what discounts they would be offering. Some Irish retailers put all their effort into Friday – and the weekend just past – but some of the big UK retailers and online giants will be pushing things hard today.

Amazon.com and amazon.co.uk This will be the first port of call for many Irish consumers. There will be thousands of deals available , with more added throughout the day, so if you’re really keen you will need to check back regularly.

Ebay.ie Virtually everything you can think of can be bought on eBay. Not everything is caught up in the Cyber Monday madness, but a whole lot of it is. Game.co.uk This site has been promising up to 50 per cent off across its range, though its big push was Black Friday, so you’d want to get your skates on.

Harveynorman.ie The Harvey Norman site was just terrifying in the run-up to Black Friday. It was just two colours – black and yellow – and was very shouty. The big selling point was that it was promising big discounts and a price-matching deal.

Dyson.ie It’s not just traditional retailers that are offering deals today. If you’re in the market for a vacuum cleaner, you could do worse than check out the Dyson website, which is promising savings of up to €200 on its fancy machines. Won’t ship to Ireland?: Delivery solutions It can be terribly frustrating to spend hours diligently loading your online shopping trolley only to discover when you get to the checkout that the UK-based retailer where you found all your best bargains doesn’t deliver to the Republic of Ireland.

There are workarounds. Parcelmotel. com is one. You have your order shipped to Parcel Motel’s Northern Ireland address and they deliver to one of their many drop-off points around the country, or alternatively to your home.

A competing – and possibly better – service has just been launched in time for Christmas by DPD Ireland. Like Parcel Motel, Parcel Wizard offers shoppers in the Republic a virtual UK address. Once the parcel is received at its virtual address location, it is readdressed to you home address or another preferred address.

The company will charge Irish consumers €3.85 for this service, but will provide three free “trips” to shoppers between now and December 31st as part of its launch offering.

If you are a reluctant shopper and concerned about giving out your credit card details to all and sundry, then you could check out paypal.com – it is a safe and secure method of payment when dealing with multiple online vendors, and is the only way to pay when you’re doing business with the likes of eBay and Etsy. Paypal acts as a go-between for your credit card and the website in question.