Faulty boards at risk of overheating, exploding or catching fire 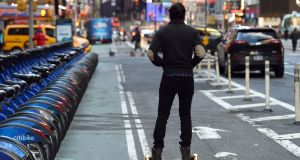 Argos has confirmed it has removed its line of hoverboards, called the Nevaboard, from sale while it carried out extra testing. Photograph: Timothy A Clary/AFP/Getty Images

The Competition and Consumer Protection Commission is considering taking enforcement action against a number of retailers selling hoverboards due to worries over safety standards.

Director of Communications with the commission Fergal O’Leary told RTÉ’s News at One said Irish retailers had a responsibility to ensure the products they sell are safe.

Mr O’Leary said if plugs, fuses, cables, chargers or battery packs failed, hoverboards were at risk of bursting into flames. He said consumers who wished to purchase a board should ensure it had the CE mark.

“We are doing whatever we can to stop at the point of entry, in the ports, these products coming on the market, or indeed we’re stopping retailers from selling them,” he said.

Argos confirmed it had removed its line of hoverboards, called the Nevaboard, from sale while it carried out extra testing.

It said in a statement: “As a responsible retailer, Argos takes customer safety extremely seriously. We have stringent processes in place to ensure that all products we sell conform to safety standards.

“Due to concerns raised by Trading Standards in relation to hoverboards from a range of manufacturing sources, we have decided to undertake additional testing on our Nevaboard product, which we sell exclusively in the UK.

“While we undertake these checks, we have temporarily withdrawn the Nevaboard from sale.

“Should any customer be concerned about their product, they can return it to their nearest Argos store for a full refund. We apologise to customers for any inconvenience this may cause.”

Amazon has advised customers who have bought hoverboards with unsafe plugs to throw them away as a watchdog urged all retailers to remove them from sale.

The internet giant has sent two separate emails, the first to customers who bought hoverboards with non-compliant UK plugs.

The email reads: “We’ve received information that your order purchased through the Amazon.co.uk website is unsafe for use as this product is supplied with a non-compliant UK plug.”

The email says these customers should dispose of the boards at a recycling centre, adding that they will receive a full refund.

It says: “We regret the inconvenience this may cause you but trust you will understand that your safety and satisfaction is our highest priority.”

Another email sent to all others who bought the boards warns that trading standards has raised concerns about their safety, in particular their rechargeable lithium batteries and plugs, and includes a link to safety tips.

It asks anyone who would rather not keep the product to contact Amazon customer service.

Listings for the boards appear to have been removed from Amazon UK, John Lewis and Argos.

The UK Government has warned consumers to “think twice” about buying the must-have Christmas gift amid fears over imitation devices being sold at discount prices.

Earlier this month, National Trading Standards said 15,000 of the 17,000 scooters examined since October 15th had been seized, mainly for having non-compliant electrical components that could explode or catch fire.

Many of the boards were found to have non-compliant plugs without fuses, which increase the risk of the device overheating, exploding or catching fire, and cut-off switches which failed when tested.

The UK’s retail ombudsman watchdog said businesses could be liable for any injuries.

Chief ombudsman Dean Dunham said: “I would urge UK retailers to take the responsible step of removing unsafe hoverboards from sale or face the risk of the full force of the Consumer Protection Act, under which the retailer can be held liable for any injuries caused by unsafe goods.

“Retailers who continue to sell hoverboards, that they deem to be safe, should also take note of the Crown Prosecution Service’s position. They have made clear that for safety reasons it is illegal to ride these hoverboards in public (on the road or paths) and this important information should be communicated to the consumer at the point of sale.

“Consumers who have already purchased a hoverboard, perhaps as a Christmas present, should contact the retailer and for their written assurance that it’s safe and in particular that it has a compliant plug with a fuse.