CSO seeks to use mobile roaming data for tourism statistics 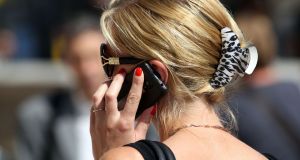 Phone location data is seen by data protection authorities worldwide as very sensitive because of the huge amount of private information it may give away about a person, their lifestyle and movements. Photograph: Steve Parsons/PA Wire

The Central Statistics Office has sought a change in EU law to allow it to use roaming data from mobile phones to help compile tourism statistics.

Phone location data is seen by data protection authorities worldwide as very sensitive because of the huge amount of private information it may give away about a person, their lifestyle and movements.

In a submission to the European Commission, the CSO indicates it would like to see legal definitions broadened so people would not have to give consent to the use of their location data for statistical purposes.

The CSO said this type of data was “not only valuable for the compilation of tourism statistics” but has also been identified as having “significant potential value” in relation to compiling data on other migration patterns, such as day time, night time, weekday and weekend movements of the population.

The submission outlines the CSO’s views on the so-called e-privacy directive of 2002, which is under review. It says there is uncertainty in national law about its entitlement to collect and use roaming data.

A feasibility study carried out for the commission on the use of mobile phone data has said first steps have been taken in many countries to start using mobile positioning data in tourism statistics, including Slovenia, Belgium, Austria and Greenland.

Ministers in North expected to agree timetable for easing of Covid-19 restrictions 17:39
‘They could have killed me’: Man pushed off bicycle while cycling at Sally Gap 17:32
Covid-19: Vaccination of vulnerable under-60s to resume 17:25
Bank of Ireland wins appeal over quashing of possession order for woman’s home 17:23
Data watchdog writes to Sinn Féin over collection of Facebook users’ information 17:39