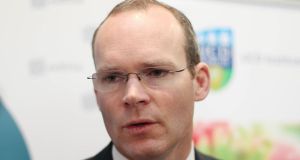 Minister for Agriculture and Food Simon Coveney: “We acted quickly and swiftly and with absolute priority to get to the bottom of the horsemeat crisis which became a European crisis very, very quickly.” Photograph: Niall Carson/PA Wire

Minister for Agriculture Simon Coveney has defended the Government’s reaction to the horsemeat scandal after a House of Commons inquiry levelled criticism at Irish authorities for failing to prosecute those responsible.

The scandal broke in January when the Food Safety Authority of Ireland (FSAI) announced that horse meat had been found in frozen beef burgers. It subsequently emerged that Nestlé, Findus, Tesco Birds Eye, Ikea and Burger King products were affected.

Defending the Government’s reaction to the scandal this morning, Mr Coveney said a “tough, hard-hitting” report into the presence of horse meat in Irish meat products was published three months ago.

“We acted quickly and swiftly and with absolute priority to get to the bottom of the horsemeat crisis which became a European crisis very, very quickly,” Mr Coveney told RTE’s Morning Ireland.

The Equine DNA &#38; Mislabelling of Processed Beef Investigation report outlined measures being taken by the State to ensure there was no repeat of the false labelling scandal.

Mr Coveney said the State is pursuing one prosecution “in relation to one company that we know deliberately put false labels on product”.

He said the Government has been taking legal advice as to how to secure that prosecution. “I’ve made it very clear that I want to secure prosecutions but I’m not going to go to court unless I know I can win,” he added. “It takes time to put a case together to make sure you win but I can assure you it is not because of a lack of effort and if we can secure a prosecution we will do that.”