Coin rounding to begin as 1 cent, 2 cent coins phased out 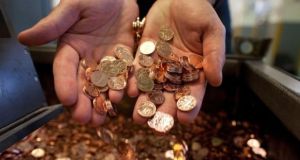 Irish consumers will begin receiving change in cash rounded off to the nearest 5 cent from Wednesday, October 28th as part of Ireland’s rounding initiative which aims to reduce the use of 1 cent and 2 cent coins.

The rounding will only apply to cash payments with the total amount of any bill being rounded up or down to the nearest 5 cent mark. Rounding will be conducted on a voluntary basis while 1 cent and 2 cent coins will remain legal tender.

Customers will still be entitled to ask for exact change.

The official rollout out day, which takes place on October 28th, follows the successful trial conducted by the National Payments Plan in Wexford in 2013 which showed 85 per cent of consumers and 100 per cent of retailers in Wexford welcomed the national rounding of cent coins in Ireland.

The Central Bank has distributed packs to 20,000 retailers across the State which will allow businesses to indicate whether they are taking part in the rounding process. Stickers, till wobblers and posters will also be on show in shops from October 28th.

Ronnie O’Toole of the Central Bank described the reaction to rounding as “fantastic” and said he expected Irish people would adapt well to the change.

“We migrated to the euro ahead of most other countries, and the indications so far are that consumers and retailers alike will embrace rounding,” he said.

Change for Charity and Make-A-Wish are calling on people to donate their hoarded 1 cent and 2 cent coins to charity.

Changes on a total bill will be rounded up or down to the nearest five cent on transactions, for example: