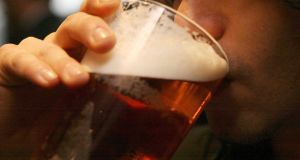 The decision to hold excise levels on alcohol as they were in Budget 2017 has met with a mixed reaction in the drinks industry. File photograph: Johnny Green/PA Wire

Alcohol was once an “old reliable” for budget price increases - but for the second year in a row there has been no increase in the price of a pint.

The decision to hold excise levels as they were has met with a mixed reaction in the drinks industry.

The Licensed Vintners Association (LVA) described the lack of change in excise rates - when Ireland had the highest excise rates in Europe - as a “missed opportunity” at a time when cross-Border shopping is becomingly increasingly attractive to consumers due to the fall in sterling.

Sterling has fallen by 20 per cent since the Brexit vote, making cross-Border shopping a more attractive proposition for Irish consumers given that alcohol is invariably cheaper in the North.

“Irish consumers continue to pay the highest prices for alcohol in Europe. Put simply, excise is a tax on consumers, jobs and tourism,” he said.

Mr O’Keeffe said the UK is Ireland’s most important tourism market, with 1.2 million visitors every year.

“If a lot fewer tourists come here from the UK, and those that do come spend less, this will have a hugely detrimental effect on our tourism industry,” he said.

“In that light there is strong justification for a substantial cut in excise. Let’s not forget this country already has one of the highest excise rates in Europe.”

However, the National Off-Licence Association (NOffLA) has said the decision not to increase excise duty on alcohol will “offer some relief to the difficulties currently being faced by the independent off-licence industry in Ireland”.

Nevertheless, NOffLA government affairs director Evelyn Jones said its members in its five Border counties are already facing pressure from cross-Border shopping “and are wholly unsupported - as this uncertainty looks likely to continue”.

She estimated that a further 1,786 jobs could be created in the off-licence trade if the Government cuts excise rates to 2012 levels.

She said: “The extreme difference between our excise and our European partners is unsustainable and needs to be addressed by the Government going forward.”

The Restaurants Association of Ireland (RAI) welcomed the fact that excise remains the same, as does the 9 per cent VAT rate for the sector.

Chief executive Adrian Cummins said it was “crucial not only for the sustainability of restaurants and businesses in the tourism sector but also to job creation and the continued growth of our economy”.

He pointed out that 64 per cent of the price of a bottle of wine is excise, and a reduction of excise duty would be a “move that is pro-jobs, pro-business and pro-tourism”.

Fáilte Ireland also welcomed the retention of the reduced rate of 9 per cent for the hospitality sector introduced by the Government in 2011.

Fáilte Ireland chief executive Shaun Quinn said it provides a “certain amount of stability and support for tourism businesses as they seek to navigate choppy waters during the year ahead”.