Bin diets - get slim for less 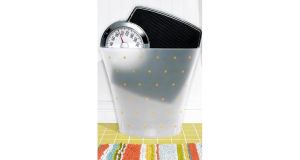 Bin the miracle diets and rapid weight loss regimes: eat healthily and take the stairs instead for long-term weight loss.

LAST WEEK Pricewatch received a press release issued on behalf of Lyons Tea. “New research from China has found that regular consumption of green tea, which is rich in catechins, can have a very real and positive effect on weight loss and the body shape of moderately overweight Chinese individuals,” it read.

Despite not being a “moderately overweight Chinese individual” we read on.

Turns out that the “new investigation”, which was funded by the Lipton Institute of Tea, monitored the effects of green tea consumption on body weight, body fat mass and fat distribution in just 182 people and found that, compared to a control group, they lost weight and toned up after 90 days.

This “news” prompted Gráinne Galvin of Lyons Tea to issue the release in which she claimed it would be “interesting to see further research to determine if the same effects occur in other populations, such as here in Ireland”.

It is a complete non-story with virtually no relevance to an Irish audience but in January, when so many of us are determined to shed the pounds piled on over Christmas, businesses appear willing to go to almost any lengths to link themselves to a positive weight loss story.

And to be fair to Lyons Tea, drinking green tea is better than many of the dieting options presented to bloated, hungover and overweight consumers in January.

Has the Metabolism Miracle killed GI? Do South Beach and Atkins have any currency or is the Diet Plate Calorie Counted Breakfast Cereal Bowl – yours for just €20 – a better option? Will the 30-day Shred Plan shed excess pounds or would you be better off eating acai berries which will either see you “lose 30 pounds in 30 days” or lose €30 every 10 days, depending on which website you visit.

Right now Amazon.com is selling around 10,000 diet books as well as countless pills, workout DVDs and talking fridge magnets, but almost everything out there will not, according to nutritionists and doctors, help people lose weight in the long term.

The diet industry in the US alone is worth in excess of €50 billion annually. Figures for Ireland are harder to come by, but given our insatiable appetite for revolutionary diet plans and the amount of diet magazines and books stocked in shops, the cost of weight loss in Ireland runs into hundreds of millions of euro each year.

Repeated surveys over many years from medical experts and consumer groups have shown that between 90 and 95 per cent of all diet programmes fail.

Dr Joe Fitzgibbon runs weight-loss clinics in Dublin and Galway and has written extensively on the topic of weight loss from a medical perspective.

He accepts that some diet programmes may have a short-term benefit for some people and lead to rapid weight loss in the early stages, but says no diet programme will be sufficient to keep weight off long term. “You have to change your lifestyle and that can be a very hard thing for people to do,” he says. We live in an “almost totally automated world where we do very little by way of exercise and that is contributing hugely to the problem.

“If the nation was to suffer a power cut for just 30 minutes every evening and all the televisions were to go off, leading people to go for a walk, then not only would you see people lose weight you would also knock 30 per cent off the national healthcare bill.”

Darya Pino a San Francisco-based University of California scientist and self-styled foodie agrees. She offers a scientific perspective on health and nutrition through her blog, Summer Tomato, and is a frequent contributor to the hugely influential Huffington Post.

On New Year’s Eve she posted to that site under the headline “A New Decade’s Resolution: Quit Dieting”.

The post offered 10 simple and cheap alternatives to the dieting yo-yo – eat more vegetables, less desserts, take the stairs and eat slower are just four of her simple suggestions.

Speaking to The Irish Times last week, Pino said the logic behind the diet industry was flawed. “While it is definitely possible, almost easy, to lose weight on any short-term diet, unless new permanent habits are developed the weight will come back.

“Diets stop working for most people after six months even if they stick to them.”

She believes that one of the reasons the dieting industry continues to thrive despite its obvious failures is because for some people the act of going on a diet is a source of comfort “because it helps you feel in control of your life. We are shown celebrities who have lost weight and we want to know how they did it. Our selective memories forget that even celebrities will probably gain the weight back in a few months or years.”

The VHI offers online tailor-made diet packages where subscribers can input their personal details including food likes and dislikes and it builds programmes lasting between six and 10 weeks. The insurer’s marketing director Declan Moran is keen to distance the VHI’s programmes from the faddy diets.

He accepts they will not work for many people, particularly for the 15-20 per cent of Irish people who are clinically obese, but says that for others weight loss is about making smaller changes that will stop them sliding into the obese category and online programmes can be useful.

“It is a tiny, tiny part of our business and not a big money spinner but we are genuinely trying to get people into a space where they look after themselves as best they can.”

In the early 1990s the US-based National Institutes of Health (NIH) Technology Conference published a list of recommendations for consumers considering weight-loss programmes.

The recommendations may be nearly 20 years old but they are as relevant now as they ever were. “In evaluating a weight-loss method or program, one should not be distracted by anecdotal ‘success’ stories, or by advertising claims,” it cautioned.

It suggested that before embarking on any programme, consumers should find out the percentage of all participants who completed it, the percentage who had achieved various degrees of weight loss and the proportion of that weight loss that was maintained at one, three, and five years.

One suspects that if this criteria was applied by all dieters, the industry as we know it would collapse overnight.

Pino says the only long-term strategy for tackling the obesity crisis which is engulfing the developed world is to work toward building a positive relationship with healthy, wholefoods.

“Most of us have forgotten what garden-fresh broccoli or homegrown summer tomatoes taste like. But rediscovering them is a wonderful feeling that we can use to help us rebuild our food culture. What I mean is re-establishing traditional eating habits like sit-down breakfasts, family dinners and desserts as special occasion food.

“Not only is this more simple than dieting, it is also a lot more fun. But it is also a fundamental change in how we live our lives. It will take some initial effort to make the change, but once new habits are established sticking with it becomes second nature.”