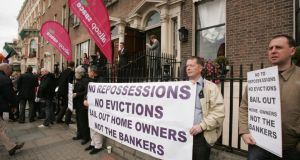 Members of New Beginnings and the Defend Our Homes League protesting outside an auction by Allsop Space of 74 lots of property. Photograph: Alan Betson

The group representing 800 estate agents has been asked to sign a public declaration that its members would boycott the sale of family homes which have been forcibly repossessed by banks.

The head of the Irish Mortgage Holders’ Organisation (IMHO) David Hall said last night that he expected the declaration to be signed by the Institute of Professional Auctioneers and Valuers (IPAV) by the end of the week.

Mr Hall said this would send a message out that banks would not be able to act unilaterally on home repossessions and profit from easy sales.

It follows on from a similar agreement between his organisation and property auctioneer Allsop Space at the weekend.

Mr Hall said that while there were some circumstances where family homes could be sold, such sales should only be allowed when all parties agree the mortgage is unsustainable and not when a bank declares that to be the case and refuses to work with borrowers on alternative arrangements. He also said if a property must be sold it should only happen when a deal is done on the entire debt.

“These agreements when they are signed will be an example of social solidarity but perhaps an unfortunate one,” said Mr Hall. “It is unfortunate they are needed because the Government should be in control of the situation.”

He said a dramatic spike in home repossessions was coming down the tracks with 15,000 letters sent by banks to distressed mortgage holders in recent weeks. “A bank acting unilaterally to seize someone’s home before leaving them with residual debts is no solution. We need to provide better deals and better solutions because the alternative is a free-for-all.”

Director of auctions at Allsop Space Robert Hoban said the agreement it reached with the IMHO was a formal acknowledgement of what the agency was already doing informally. It was forced to cancel an auction at the Shelbourne Hotel in Dublin last month after protesters stormed the hall. “I hope this makes it clear to people what we do and addresses a lot of misapprehensions that exist about us,” said Mr Hoban.

“Banks do have a legal right to sell repossessed properties but if it is a family home that someone has been thrown out of against their will then we are not comfortable selling it,” he said.

IPAV chief Paul Davitt said yesterday most of its 800 members were already unwilling to sell forcibly repossessed homes. “I can’t tell every member to refuse to sell certain properties but I would imagine they would refuse to sell family homes which have been repossessed,” he told RTÉ radio.