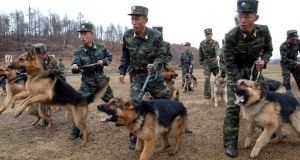 Irish NGO Concern has temporarily suspended its aid work in North Korea due to the increasing threat of war. The suspension takes place with immediate effect due to fears over staff safety.

The non-governmental organisation has 14 workers in the area. Eleven of them are from North Korea, while there are also three international workers from Nepal, India and Sweden. The only Irish Concern employee in the area left a number of months ago.

Concern’s overseas director of aid Paul O’Brien said the organisation had a meeting with the Department of Foreign Affairs last week, where the decision was made.“Two of our international staff are outside the area now and we can’t really function without them. We will return to work once it settles down there,” he said.

Mr O’Brien said he hopes things will settle in the country by the time former leader Kim Il-Sung’s birthday takes place on April 15th. The birthday is celebrated as a public holiday where North Koreans celebrate the life of their “Eternal President”, who died in 1994.

Mr O’Brien added that external aid is vital for North Korea, as their trade is limited to China. “Aid is quite important for then. I witnessed tractors from World War One being used there. The whole system is in a state of decay,” he said.

The Department of Foreign Affairs changed its travel advice for Irish people going to North Korea during the weekend. The department is now advising people to avoid all non-essential travel to the area and if essential, to register their travel via its website dfa.ie.

A statement from the Department said: “Since conducting what was stated to be a nuclear test on February 12th 2013 tensions have increased on the Korean Peninsula. Most recently, these statements have concerned the operation of the Kaesong Industrial Complex shared with the Republic of Korea (South Korea).

“In light of the fact that the North Korean authorities have indicated to the diplomatic community that they cannot guarantee their safety, the Department of Foreign Affairs and Trade now advises against all non-essential travel to the DPRK (North Korea).”