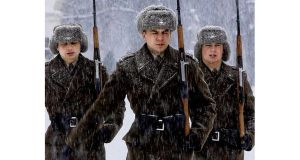 Soldiers return to duty at the tomb of the unknown soldier in Warsaw on Wednesday; 122 people have died from the cold in Poland where the temperature has fallen as low as minus 15 degrees. Photograph: Czarek Sokolowski/AP Photo

As forecasters warned of dangerous conditions continuing today, commuters and air travellers bore the brunt of the cold, snow and ice, while demand soared for home-heating energy.

The bad weather is expected to last for another two weeks, draining European gas supplies. Britain’s national grid warned that record gas demand might exceed supply for the second time this week after a drop in supplies from Norway, as dozens of big industrial users switched to other fuels to ensure heating for households.

The deaths from the cold include 122 people in Poland, 22 in Britain, nine homeless men in Germany, and 22 people who were killed by avalanches in the Swiss Alps.

Yesterday thousands of schools closed and thousands of homes were left without electricity in Britain, while 17 rail service providers said they were hit by delays or cancellations.

A Eurostar passenger train travelling between Brussels and London was stuck in the Channel Tunnel. The train, which was carrying 236 passengers, had to be dragged from the tunnel by a rescue locomotive, leading to a suspension of services.

Flights were disrupted at airports in Britain, France, the Czech Republic and the Netherlands. In Britain EasyJet cancelled 73 flights, Ryanair cancelled four while British Airways also warned of cancellations.

Public authorities were trying to clear road networks with dwindling salt supplies as motoring organisations reported long delays and a rise in breakdowns. The British Automobile Association expected to be called to 20,000 breakdowns yesterday, more than twice the average.

Temperatures fell as low as minus 18 degrees in Britain, where the cold spell is the longest since 1981. Parts of the country were colder than European ski resorts to which many Britons flock at this time of year.

Temperatures across many parts of Europe are at their lowest levels, with freezing conditions persisting in northern and central France. The French electricity system, which heats most homes, has been strained, raising the risk of widespread power cuts.

German forecasters warned of “powerful” snowstorms and blizzard conditions with temperatures falling to minus 20 degrees.

“Germany is the freezer of Central Europe,” said forecaster Dorothea Paetzold. Waterways leading to Berlin have started to freeze, impeding coal and oil deliveries to the city. Snowfalls of up to 16 centimetres (6 inches) had accumulated in the city.

Cold weather fronts in Europe are connected to similar conditions in North America by an Arctic high pressure system, said Martin Jonas, a meteorologist at the German Meteorological Service. Warmer air coming from the Atlantic and the Mediterranean Sea is causing snowfall when it hits the cold Arctic front.