Climate change may be to blame for 'great extinction' 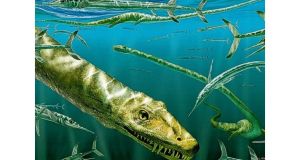 A form of climate change may have been behind the biggest mass extinction of life since the Earth formed. New research shows that the “Great Dying” took place over just 200,000 years and probably even a shorter time frame.

There had been nothing before or since to match the Permian extinction 252 million years ago, which wiped out 95 per cent of all marine species and 75 per cent of land species.

It took a full five million years for life to recover and spread back across the globe, said Dr Shu-zhong Shen of the Nanjing Institute of Geology and Palaeontology on the closing day of the American Association for the Advancement of Science meeting in Boston.

He has been studying how quickly the event took place and has narrowed it down to no more than 200,000 years. Not long ago scientists assumed the kill-off took place over a very long eight million years.

He used a combination of geologic, geochemical and stratographic data to reach this figure and believes it will become even shorter as the resolution of their techniques improves.

High-precision lead dating was used to assess 29 volcanic ash layers associated with that time. He believes climate change possibly induced by massive volcanic eruptions triggered the die-off of species. A polluted atmosphere and poisoned oceans were the result and only a limited number of species was able to survive.

Extraordinary creatures emerged during the Triassic Period that followed, with an amazing array of fossils from the time being excavated in China, said Dr Olivier Rieppel of the Field Museum in Chicago.

There are many marine reptiles in the mix, some with peculiar features.

Dr Rieppel showed a new artist’s impression of one of them, the protosaur Dinocephalosaurus Orientalis. It grew to 5m and had an exceptionally long neck that was twice the length of its trunk. He could not say how it might have used such a neck.