Chess union announces inquiry into allegations of cheating at tournament

Union to take statements from players at centre of controversy 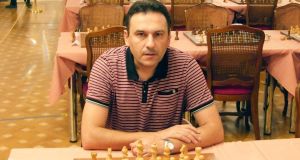 The Irish Chess Union has announced a disciplinary inquiry into a weekend incident at a tournament in Cork where gardaí were called to deal with a row beween players over alleged cheating.

The union, whose executive held an emergency meeting last night, said: “In an era when stories of misdemeanours in sporting events have almost become commonplace there is sadness at the thought that the gentle game of chess can indeed be tainted.

“It is an issue that must be dealt with through the executive of the Irish Chess Union and the rules of the organisation. Nonetheless the ancient and beautiful game of chess will transcend these difficulties.”

The union said a disciplinary committee is being formed to investigate the matter further, and it would take statements from both players at the centre of the controversy, as well as other witnesses.

Gardaí were called to the tournament at the Metropole Hotel on Sunday after Gabriel Mirza (47) confronted his teenage opponent in a toilet where the 16-year-old had allegedly being using a computerised device to assist his play.

The sport’s governing body met last night and had been expected to agree to set up one or more disciplinary committees to investigate the matter.

“It has been insinuated that one chess player was caught cheating and the reaction of the opposing player discovering this was inappropriate,” the union said in an earlier statement.

“In the 100 years of our existence we have never had such allegation; a record we can be very proud of. We have a code of conduct that all our players adhere to; it is there to allow our members to play chess in a sporting environment.”

Mr Mirza yesterday denied he had overreacted by pulling the teenager from the toilet. “I had to prove he was cheating. I was afraid he would throw the tablet into the toilet.”

Both Mr Mirza and the young player – who comes from a prominent fee-paying Dublin school – were disqualified from the tournament.