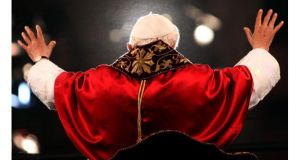 Pope Benedict XVI waves to the faithful gathered at the Colosseum in Rome during the Way Of The Cross procession on Good Friday last year. He announced today he was stepping down at the end of this month for health reasons. Photograph: Franco Origli

Pope Benedict XVI took the world by surprise this morning in Rome when he announced that he would be resigning at the end of this month.

Speaking in Latin at a meeting of cardinals in the Vatican, Pope Benedict said that he had “come to the certainty” that his strengths “are no longer suited” to fulfilling the ministry of Pope.

“After having repeatedly examined my conscience before God, I have come to the certainty that my strengths, due to an advanced age, are no longer suited to an adequate exercise of the Petrine ministry,” he said.

“In today’s world, subject to so many rapid changes and shaken by questions of deep relevance for the life of faith, in order to govern the bark of Saint Peter and proclaim the Gospel, both strength of mind and body are necessary, strength which in the last few months, has deteriorated in me to the extent that I have had to recognise my incapacity to adequately fulfill the ministry entrusted to me.”

In becoming the first Pope to resign since Gregory XII in 1415, Benedict has taken even his closest advisors by surprise.

At a news briefing today, senior Vatican spokesman Fr Federico Lombardi indicated that almost no one knew of the Pope’s intentions.He said it was his understanding the current dean of the College of Cardinals, Cardinal Angelo Sodano, was informed of the Pope’s decision only very shortly before the announcement.

Benedict will remain as Pope until 8.00pm on February 28th. Until that time, he retains all his spiritual and temporal authority.

At that point, there begins a period of interregnum or sede vacante (empty chair), when the Church will essentially be administered by the “Camerlengo” or Chamberlain, the current Secretary of State, Cardinal Tarcisio Bertone, who will summon the 120 Cardinals worldwide to Rome for a conclave to elect the next Pope.

Fr Lombardi indicated that, if this election process follows along the lines of previous ones, then the new Pope should be elected “within the space of a month” - in other words, before the end of March.

Benedict will take no part in that conclave, but rather will retire to the Pope’s summer residence of Castelgandolfo prior to taking up residence in a closed order monastery within the grounds of the Apostolic Palace.

Even if today’s announcement came as a complete surprise, attentive observers might have intuited something from remarks made by the Pope in his interview-book with German journalist Peter Seewald, three years ago.

In that book, Benedict explained: "When the Pope comes to the awareness that he psychically, physically and spiritually cannot manage his office any longer, then he has the right, indeed is understood to be duty bound to step down.”

Benedict added the Pope should not resign because of difficulties or dangers but rather could only consider resignation at a moment of relative calm for the Church.

With hindsight, the Pope may have given another indication of his intention to resign when he called a second consistory for the appointment of new Cardinals last October.

Such consistories normally occur once every three or four years. Two in a single year is most unusual and it may be that Benedict wanted to name new Cardinals to “top up” the number of elector Cardinals - those under 80 years of age - in readiness for an imminent Conclave.

The Catholic Church may now find itself at a crossroads with regard to the election of a successor to Benedict.

Many feel the time has come for a less conservative, non-European Pope, perhaps a Latin American.

There has been growing pressure on the Church for it to choose a pope from the developing world to better reflect where most Catholics live and where the Church is growing.

The cardinals may also want a younger man. John Paul was 58 when he was elected in 1978. Benedict was 20 years older.

"We have had two intellectuals in a row, two academics, perhaps it is time for a diplomat," said Father Tom Reese, senior fellow at the Woodstock Theological Center at Georgetown University.

"Rather than electing the smartest man in the room, they should elect the man who will listen to all the other smart people in the Church."

In contrast, there is a strong conservative lobby within the Curia which would dearly like to see an Italian back on the seat of Peter. By the end of March, it shall become know which faction has prevailed.

Before he was elected Pope, Cardinal Ratzinger was known by such critical epithets as "God's rottweiler" because of his stern stand on theological issues. He was the oldest man to be named pope since Clement XII, who was also 78 when he was elected in 1730. He was the first German pope since Victor II (1055-1057).

Born in Bavaria on April 16th, 1927, was a liberal theological adviser at the Second Vatican Council but became a conservative after the 1968 student movement prompted him to defend the faith against secularism.

He was archbishop of Munich before taking over the Congregation for the Doctrine of the Faith in 1981 as the Roman Catholic Church's chief ideologue. In that position, he has disciplined church dissidents and upheld church policy against attempts by liberals for reforms.

While conservatives cheered him for trying to reaffirm traditional Catholic identity, his critics accused him of turning back the clock on reforms by nearly half a century and hurting dialogue with Muslims, Jews and other Christians.