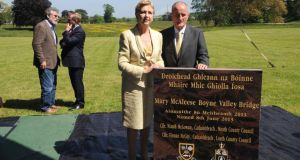 Former president Mary McAleese and her husband, Dr Martin McAleese, pose at the ceremonial stone at the naming ceremony for the Mary McAleese Boyne Valley Bridge at Oldbridge House in Drogheda as Taoiseach Enda Kenny and Sinn Féin president Gerry Adams speak in the background.

Building bridges was a theme of former president of Ireland Mary McAleese during her two terms of office and now a landmark bridge has been named after her.

The Boyne cable bridge on the M1 motorway was renamed the Mary McAleese Boyne Valley Bridge on Saturday.

Meath and Louth county councils agreed to name the 10-year-old structure in honour of her and her husband Martin’s contribution to the peace process.

Mrs McAleese said she hoped it would encourage people to think about their own role in building peace.

The renaming ceremony took place at Oldbridge House, the site of the Battle of The Boyne in 1690, a battle Mrs McAleese described as “drawing wedges so great, it seemed bridging those gaps became impossible”.

She recalled a letter she had received after the visit of Queen Elizabeth to Ireland in 2011, from an elderly Republican woman who wrote that she had “no time for monarchies and, in particular, the monarch next door... Out of deference to you, I decided I’d watch the first five minutes on television. Four days later, I hadn’t turned off the television and had cried through the entire visit. I felt it had been choreographed by angels.”

“So it is fitting that, today, we gift her the real thing. Given her latest studies in canon law, it will not be lost on her that she was indeed a pontifex, a woman who made bridges,” he said.

Mr Kenny recalled that she became president as the peace process was transforming how we saw ourselves and each other on this island.

“She worked diligently to ensure that all communities were included, and felt included, in the transformation.

“The work Mary McAleese and Martin McAleese did for people on both sides changed minds, attitudes and lives across the island and across the communities,” the Taoiseach said.