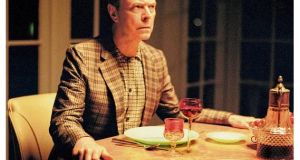 Video of David Bowie starring in a short film The Stars (Are Out Tonight), which accompanies his new single

Jumping back on to the pitch after 10 years out of the arena is no easy thing. Until very recently, David Bowie was rock music’s favourite phantom, the man who had put his finger on the pulse of the zeitgeist but was simply no longer around (or no longer cared) to do so.

Following his collapse backstage at the Hurricane Festival, Scheeßel, near Bremen, Germany, on June 25th, 2004, Bowie was taken to a Hamburg hospital where he underwent emergency heart surgery in the form of an angioplasty.

Come the end of July, back on his home ground of Greenwich Village, New York, he embarked on a programme of returning to full health.

And that was it. He didn’t write, phone or email, and public sightings were effectively dispensed with. Bowie was, to all intents and purposes, man overboard.

Of course, as the years passed the mystique surrounding him grew, though, ironically, the expectation of new music (his last album was 2003’s Reality) gradually diminished. Bowie’s need to recuperate, to spend time with his family in New York, was afforded unprecedented levels of media respect.

You’d occasionally view hastily taken pictures of what appeared to be an old man in jeans and hoodie and realise that, yes, it was Bowie and that, yes, it seemed as if he really did want to be left alone. So he was.

For his most fervent fans, of course, new music was number one on their wish list, but what’s a sexuagenarian reclusive former rock star (arguably the genre’s most commercially astute maverick and, inarguably, its most influential figure) to do with an ever-shifting cultural/ musical landscape?

How does he deal with the new consumer, who devours music soundbites at a voracious rate; all-too easily falls at the feet of pop stars who have the intellectual depth of a puddle; and tweets, ad infinitum, his or her every thought, deed and action?

It seems that Bowie was merely biding his time.

His new album, The Next Day, started life as a series of clandestine demo recordings in October 2010; strictly confidential work began in a compact, anonymous New York studio with a coterie of people including Dublin guitarist Gerry Leonard (a long-time ally) and producer Tony Visconti (ditto).

More than two years passed, and still no one outside a core group of musicians and record company executives knew about the recordings – until the wee small hours of January 8th, 2013, Bowie’s 66th birthday, when the song, Where Are We Now? (his first new music to be heard in a decade) dropped into our lives.

The mid-1990s proselytiser for the new age of the internet had achieved what many had thought impossible in this era of information overload: an element of absolute, unadulterated surprise.

Boris Johnson spends night in hospital being treated for Covid-19 06:54
Tesla engineers show ventilator prototype on YouTube 06:46
Donald Trump says virus will peak in US in next few days 06:36
Construction delays ahead, legal issues with pay cuts and some Covid perspective 06:30
Major building projects could be delayed two years after Covid crisis 05:30