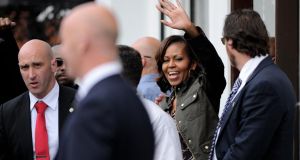 US First Lady Michelle Obama waves to the crowd as she leaves Finnegan’s Pub in Dalkey where she had lunch her two daughters Sasha and Malia with Bono and his wife Ali. Photograph: Julien Behal/PA 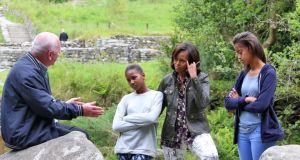 US First Lady Michelle Obama and her daughters, Malia and Sasha pictured with Tour Guide, George McClafferty during a visit to Glendalough this afternoon. Photograph: Colin Keegan/Collins. 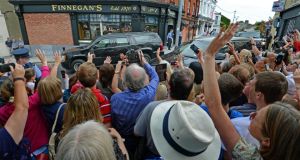 he crowd cheer as the cavalcade carrying the US First Lady Michelle Obama and her daughters, Malia and Sasha, pases through Dalkey Co Dublin today. Photograph: Eric Luke / THE IRISH TIMES 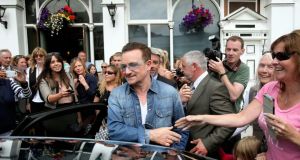 Bono leaves Finnegan’s Pub in Dalkey where he had lunch with the US First Lady Michelle Obama and his wife Ali. Photograph: Julien Behal/PA Wire

First Lady of the United States Michelle Obama ended her two-day trip to the Republic with a lunch in Dalkey with Bono.

She left Finnegan’s pub with her daughters Malia and Sasha just before 3pm, waving to the crowd as she went. Chef Paul Finnegan said they were “lovely, friendly people”. He said all three requested fish and chips while Mrs Obama chose the lobster starter.

Bono and his wife Ali Hewson were briefly caught in a crush as they left the pub afterwards. Bono said he and the Obamas had discussed everything and nothing over lunch and had talked about their families.

Mrs Obama will be reunited with US President Barack Obama in Belfast this afternoon and the family will then travel to Berlin.

The First Lady arrived in Dalkey at 1.20pm to dine at Finnegan’s pub after visiting Glendalough.

The pub was closed since early morning but it was thought that about 60 local people were inside before the first family arrived.

Bono and his wife arrived just before 1pm, accompanied by two children.

A large crowd gathered outside and whooped as the fleet of black armoured cars arrived.

The lucky few got a quick glimpse of Mrs Obama as she left the car and took a few steps into the pub. She was wearing sunglasses but didn’t turn to wave, much to the disappointment of four girls from the local Loreto Primary School who were waiting to present her and her daughters with little posies.

The Paddy Power bookmakers shop changed its sign to O’Bama Power in anticipation of the visit and a large poster of US president Barack Obama adorned the window of the health food store.

All outdoor bins were covered and there was already a strong Garda presence in the village.

Finnegans pub flew an American flag but its doors were closed before the arrival of the US First Family.

The Dalkey pub has enjoyed its share of famous visitors in the past. They include Salman Rushdie, Mel Gibson and Penelope Cruz. Maeve Binchy, who lived nearby, came in for lunch several times a week, to the same reserved table in an alcove, with her husband Gordon Snell.

The First Family was earlier given a private guided tour of the Wicklow Mountains National Park as their whistlestop tour of Ireland draws to a close.

The sun beamed down on the hills above the twin lakes at Glendalough as Ms Obama and Malia and Sasha walked through the famous monastic site. The girls were given a lesson on the ancient ruins by local tour guide George McClafferty. The valley, in the heart of the Wicklow mountains, offers some of the most popular rural landscapes in Ireland and is a well-worn tourist path for visitors to the east coast.

A huge security operation remains in place in Dublin for the 24-hour visit with parts of St Stephen’s Green and Kildare Street closed to through traffic.

Mrs Obama and her daughters had dinner last night in Matt the Thresher’s in Dublin.

This afternoon, they will head north to meet US president Barack Obama, who is at the G8 summit in Co Fermangh, before travelling on to Germany for the latest leg of his European meetings.