Are factual inaccuracies in movies justified by role in highlighting issues? 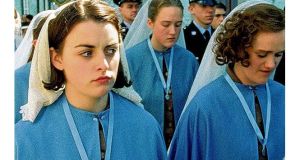 The Magdalene Sisters: the 2002 film depicts the laundries as profitable, money-making rackets and shows the women subjected to indignities including head-shaving

A feature of the campaign for justice for the women of the Magdalene laundries has been the role of historical dramatisations on stage and screen.

Over the past 20 years, there has been a series of plays and movies about what went on behind the institutions’ walls. These played a major part in shaping public opinion as well as bringing the issue to international attention.

None has had greater reach than The Magdalene Sisters, the 2002 film directed by Peter Mullan which won the coveted Golden Lion award on its release at the Venice Film Festival.

It tells the harrowing story of four teenage girls admitted to a laundry where they experience or witness routine physical and sexual abuse by nuns and a priest. Like many dramatisations, it depicts the laundries as profitable, money-making rackets, and shows the women subjected to various indignities including head-shaving.

But the question arises from this week’s report: how accurate were such narratives?

A striking feature of the McAleese report is the number of women who spoke positively about the nuns, and strongly rejected allegations of physical abuse. Against this, the vast majority reported psychological abuse. One woman said she was sexually abused during her time in a laundry by a fellow “Magdalene” who had been in the institution for some time.

The report says the 118 women it spoke to comprises a “small sample”, and is “biased towards more modern years” but it remains the largest single collection of such testimony to be published.

Criticism from the women may have been tempered by the fact that half were living in nursing homes under the care of religious orders. However, there is no escaping the fact that the report jars with some popular perceptions.

“We have always said the one-size-fits-all model of survivor does not apply,” says James M Smith, a leading researcher on the laundries and a member of the Justice for Magdalenes advisory committee.

Of Mullan’s film, he says: “I have said then and since, no survivor I have spoken to has alluded to women suffering sexual abuse in the Magdalene laundries. They were predominantly female and run by female religious; sexual abuse was endemic in male institutions.”

He notes survivors have also denied that women were stripped naked and examined by nuns, as depicted in The Magdalene Sisters. However, the use of hair cutting as a punishment is confirmed by a set of laundry “house rules” that Dr Smith discovered.

This document is included in the McAleese report, along with testimony of three women who said they had either experienced or seen hair-cutting as a punishment. Head-shaving was reported only once, however, in a case of head lice.

Dr Smith, who is associate professor in the English department at Boston College, has previously critiqued The Magdalene Sisters in academic papers, saying it “reduces most of the nuns on the screen to mere stereotype”. He has also argued the film “replicates the critical shortcoming” of the work of a previous Channel 4 documentary, Witness: Sex in a Cold Climate, by deciding “neither to solicit nor to incorporate the religious orders’ version of the Magdalene story”.

Patricia Burke Brogan, the former novitiate whose groundbreaking play on the issue, Eclipsed, was first staged in 1992, says she too has harboured concerns about some of the dramatisations.

“I never saw any physical beating-up. I know in some places the women beat up one another because they were trapped and frustrated.” But, she says, the critical issue is that “the women had their freedom taken from them”.

Of Mullan’s film, she adds: “I could not stand it. Some of the parts were really over-the-top. The nuns were monsters.” To a lesser extent, she says, other films have contained “inaccuracies”, including those showing women having babies in laundries, something which, she says, would not have occurred.

Mullan’s agent said he was unavailable for comment this week but the director has previously denied claims that he exaggerated abuses, saying rather he “did the opposite”.

Campaigners believe the role such movies played in highlighting the issue justified any artistic embellishment, and this view is shared by Louise Lowe, director of the award-winning play Laundry, who says The Magdalene Sisters “served an important function at the time”.

Of her own work, which was staged at a former Magdalene asylum in Dublin, she says: “We make art; we are not historians or sociologists. We did not make up anything, which probably made our work a lot harder. We spoke to families and people who had stories or memories.”

She says an important element of Laundry was “acting as a witness” and exploring the responsibility of people outside of the church – an issue that resonates with this week’s report. “The more we researched the more we realised it was too simplistic to separate those things.”

Dr Smith describes Eclipsed as the event that “started off” the documenting of what happened in the laundries, and he notes the recently launched UCD Magdalene Oral History Project would be a natural conclusion. Whatever about artistic depictions of the laundries, he adds, “the survivor testimony has been consistent”.

1:02 Varadkar confident phase two of easing of Covid-19 restrictions will go ahead as planned