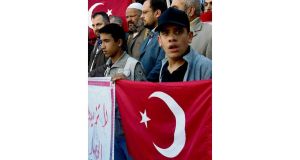 Palestinian supporters of during a demonstration at the Egyptian representative office

PEACE ACTIVISTS from 40 countries and vehicles loaded with food and medical supplies in the Viva Palestina convoy entered Gaza overnight from Egypt in spite of unrest along the border.

Yesterday afternoon an Egyptian border guard was killed, and nine guards and 35 Palestinians were injured, five critically, when a protest erupted on the Gaza side of the frontier.

The protest was against Cairo’s construction of an underground iron wall to halt smuggling of essential goods through tunnels beneath the border.

The violence was quickly quelled by police dispatched by the de facto Hamas government determined to prevent further delays of the aid convoy, originally scheduled to arrive on December 27th, the anniversary of the launch of Israel’s latest war on Gaza.

The clashes coincided with the conclusion of a deal between convoy organisers and the Egyptian authorities. Under this deal, all 515 activists and 159 lorries carrying humanitarian supplies would be permitted to enter the Strip while 59 lorries carrying generators and vehicles would be returned to the Syrian port of Latakia and dispatched to Palestinian refugee camps in Syria and Lebanon.

Organisers rejected an Egyptian proposal to hand the heavy lorries over to Israel, which operates the goods crossings into Gaza. “We refuse to ask permission from Israel,” John Hurson of Co Tyrone, one of the dozen Irish citizens involved in the mission, told The Irish Times.

British MP George Galloway, a leading figure in the Viva Palestina effort, argues that Israel does not deliver on its promises. He had been promised that all lorries would be allowed to proceed to the Strip if they were shipped to el- Arish.

The original route of the convoy, rejected by Cairo, involved entering Egypt through a Red Sea port and driving overland to the Gaza crossing at Rafah. The organisation accuses Egypt of reneging on this agreement and of complicity in Israel’s blockade of Gaza.

Last night activists were attacked in el-Arish port by 2,000 Egyptian police and thugs while awaiting a decision from Cairo on the fate of the convoy. Forty activists, including five members of the Derry team and one from Cork, sustained head wounds, gashes and bruises while 15 policemen were said to be injured.

Four policemen were briefly held in retaliation for the arrrest of seven convoy members from the US, UK, Malaysia and Kuwait. They were released following Turkish intervention.

Minister for Foreign Affairs Micheál Martin expressed con- cern over the disturbances and said everything was being done to “ensure the safety of the [Irish] volunteers in el-Arish” and the “safe passage” of the convoy to Gaza.

Meanwhile, in Bethlehem, Palestinians protested against the presence at the Orthodox Christmas Eve service of Jerusalem’s Greek Orthodox Patriarch Theophilos and threatened to declare him persona non grata in the town where Jesus was born. He is accused of selling or leasing church land to Israel. Scout bands greeted the Syrian and Coptic patriarchs with drums and bagpipes when they entered Manger Square but fell silent when Theophilos arrived.

“I was concerned to hear that a number of Irish citizens had been caught up in disturbances which took place last night in el-Arish, an Egyptian port near the border with Gaza, and that at least one of them had been injured in the incident,” he said.

“I have been speaking with the family to assure them that we were doing everything possible to ensure the safety of the volunteers in el-Arish of one of the Irish volunteers in question. He said he had also spoken with Ireland’s Ambassador to Egypt, Gerard Corr.

The Irish Embassy in Cairo has been in contact with the volunteers on the ground and with the Egyptian authorities, he said.