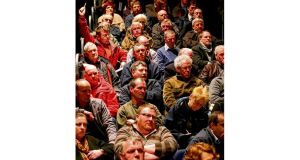 Some of those attending the public meeting on the proposed salmon farm in Galway city. Photographs: Joe OShaughnessy 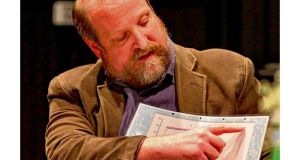 State bodies have disagreed on the science underpinning a proposed fish farm earmarked for Galway Bay.

Bord Iascaigh Mhara (BIM) has applied for a licence to “grow” some 3.5 million salmon a year in cages on a 456 hectare site in the lee of the Aran Islands and claims the development has the potential to generate revenues of some €100 million annually. The sea fisheries development board said the move will create 500 jobs and provide an annual payroll of €14.5 million.

However opposition has come from fellow State agency Inland Fisheries Ireland which has raised scientific concern that potential infestations of sea lice could destroy Ireland’s prized reputation for wild Atlantic salmon. This would endanger an angling industry worth at least €143 million a year and an associated €83 million in tourism revenues.

The Inland Fisheries body also produced a study, in collaboration with the Royal Society, which indicated that 39 per cent of wild salmon mortalities could be attributable to sea lice associated with fish farms.

However at a public meeting in Galway this week BIM said Inland Fisheries Ireland had got its science wrong. The board said sea lice infestation was in fact “unlikely to be a significant factor influencing the conservation status of salmon stocks”.

It quoted alternative research which it described as “definitive”, carried out over a nine-year period by the Marine Institute and NUIG Galway involving more than 350,000 fish, released into eight different rivers in 28 experiments.

BIM said this research indicated that the level of marine mortality attributable to sea lice infestation was small – about 1 per cent in absolute terms.

Donal Maguire, BIM’s director of aquaculture development, said the research concluded there was “no evidence” to suggest sea lice infestation of migrating smolts was the significant cause of wild fish mortality.

Mr Maguire insisted that Inland Fisheries had “got its science wrong”.

He said “sea lice are not the issue when it comes to marine survival of salmon”. Mr Maguire said that BIM was planning three fish farms on the west coast. It had developed a salmon farm at Clare Island that produced 4,000 tonnes of salmon a year for 20 years with the local community’s backing.

BIM chief executive Jason Whooley said the site for the Galway Bay fish farm had been carefully selected, taking into account the locations of special areas of conservation and other protected areas. While the proposed fish-farm area was 456 hectares – larger than neighbouring Inis Oírr – the cages would be at just two locations at the northern and southern ends of the site. They would occupy just 18 hectares each. Tests had shown the cages would be barely visible, if at all, from Inis Oírr, he said.

Mr Whooley said the density of salmon in the cages would be limited to 1 per cent to 99 per cent water, or 10kg of fish to a cubic metre of water. Constant movement would ensure firm flesh and feeding would meet international criteria for organic salmon.

He said the fish farm would be phased in “not just plonked there at full size”. Employment would also be ramped up and, ultimately, reach 350 direct jobs and 150 more in support services such as net-making.