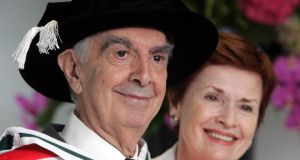 The actor played Leopold Bloom in the 1967 film adaptation of James Joyce's Ulysses in 1967, starred in the 1960s BBC sitcom Me Mammy and feature US comedy Frasier and US political drama the West Wing. He played a priest in Neil Jordan’s 1997 film The Butcher Boy.

Minister for Arts Jimmy Deenihan has paid tribute “a giant of stage and screen” .

“During his career in theatre and film, both at home and abroad, he is remembered for the quality of his performances in a range of challenging and often ground-breaking roles,” Mr Deenihan said.

Mr Deenihan noted O’Shea’s portrayal of Leopold Bloom as a particular highlight of his film career, as well as his performance in Zeffirell's Romeo and Juliet. Many would remember him with “great fondness” for roles in television series, he said.

“Over his life, he reached the widest audiences from across the globe - on stage, on film, and on television - and was internationally recognised for the quality of his work.

"I would like to express my deep condolences to his family, and to his many friends,” Mr Deenihan said.

“Milo just had it all,” and his versatility singled him out, Gate Theatre director Michael Colgan said today.

His career was “the most varied” and no actor would be able to achieve his CV, which ranged from major roles in the Abbey and Ulysses to Carry on Films and sit-coms on both sides of the Atlantic as well as working with Woody Allen and Paul Newman , Mr Colgan told RTE Radio.

Mr Colgan, who worked with O’Shea and the late David Kelly in the Gate’s production of the Sunshine Boys, said they were both gentlemen, hilarious and genuinely witty.

He is survived by his wife the actress Kitty Sullivan, his son Colm and wife Deirdre and his son Steven and his partner Melanie Carrick as well as his three grandchildren. He was previously married to Glenroe actor Maureen Toal, who died last year. The couple divorced in 1974.

O'Shea starred on the big screen, television and stage roles and was known as as a skilled comedian and character actor. He has had guest roles in many hit shows over the years, including Cheers, The Golden Girls, Spin City and St Elsewhere. He also starred in Roger Vadim's movie Barbarella as a mad scientist named Durand Durand.

Funeral details will be announced at a later date.