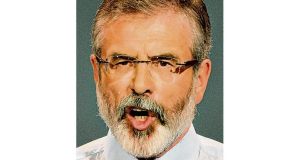 Gerry Adams: about €30,000 paid by friend in US for laser treatment

Sinn Féin leader Gerry Adams has not declared financial assistance worth approximately €30,000 which he received for a medical procedure in the US from Irish-American businessman Bill Flynn.

The party yesterday confirmed Mr Adams did not declare the financing of the operation for a prostate problem – which took place late last year – in his annual statement for the Dáil’s register of interest filed last month.

According to party sources, there is a view that Mr Adams did not need to declare the interest but if he needed to he would.

The Sinn Féin TD for Louth disclosed publicly for the first time on Saturday that Mr Flynn had paid for the procedure, which he described as a “long-standing and very painful complaint”. He was speaking on the Marian Finucane Show on RTÉ Radio on Saturday.

Mr Adams denied that he was being a hypocrite for availing of private care while advocating public health services.

He said he availed of laser treatment that was not available in the North for the condition.

He said of the offer made by Mr Flynn, the former chief of the giant Mutual of America insurance company: “Myself and my wife and my family are eternally grateful for that. I’m still in recovery but I am doing very well.”

Party sources also defended Mr Adams’s decision to accept the offer on the basis that it was an arrangement between two friends, with no implications for the taxpayer or no involvement with Sinn Féin.

They said it was the only payment or offer of that kind received by Mr Adams.

During the interview, Mr Adams also disclosed that he has had some difficulty in ensuring he meets payments on his holiday home in Donegal.